The Knowledge Technologies Group at the USC Information Sciences Institute has created a system that configures facts contributed by human users through a wiki site into a form that the digital Semantic Web system can understand and reason about.

The Shortipedia application won third place in the 2010 Semantic Web Challenge, a major competition that recognizes accomplishments in developing significant applications in the Semantic Web.The awards were announced during the International Semantic Web Conference held last week in Shanghai, China. The award followed recent success in the 2010 Triplification Challenge, and reaffirmed ISI’a status as a major contributor to the research and deployment of Semantic Web technologies. 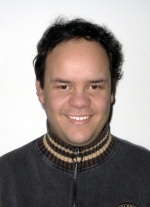 Shortipedia was developed by Denny Vrandečić, (left) a post-doctoral student who joined ISI in June, Varun Ratnakar, (right, below) a research programmer in the group, and Yolanda Gil, Director of the Knowledge Technologies Group at ISI. They collaborated with Markus Krötzsch, a postdoctoral researcher at the University of Oxford.

Shortipedia is a wiki site where users can contribute facts that the system can reason about to answer questions. It builds on the Semantic MediaWiki software that Vrandecic developed with long time collaborator Krötzsch while they were students at the Karlsruhe Institute of Technology in Germany.

As in Wikipedia, each page in Shortipedia corresponds to a topic (e.g., “Information Sciences Institute”), and the user can add new facts as a property and a value (e.g., “part-of VSOE”). Semantic MediaWiki uses these and other facts to answer queries such as “find all the research institutes of USC.”

To develop Shortipedia, the group developed extensions to annotate each fact with sources to support it, so that alternative claims can be taking into account. For example, the Linked Data Cloud contained facts that Shortipedia incorporated to the ISI topic page stating that ISI is part of USC and that Yolanda Gil and Varun Ratnakar are members of ISI.

The 2010 Semantic Web Challenge accepted only 14 entries that met the minimum criteria for the competition. Six of these entries were selected as finalists by the judges. In the final round, the finalists gave presentations and demonstrations of their systems.

The awards were announced at the final session of the conference, where the conference’s Best Paper Award went to Paul Groth who is a former member of the ISI Knowledge Technologies group.

“I was extremely happy that we were selected as finalists,” Vrandecic said from Shanghai. “Many people saw the demonstration and were interested in using our approach for their own work.”

The Semantic Web Challenge has been held since 2003. Each year, entries are submitted that demonstrate end-user applications that integrate information in the Web using W3C standard Semantic Web languages such as OWL and RDF.

Each entry defines its own task and scope, and there are a minimal set of criteria that they must meet such as perform a useful task for a web user, integrate data from sources that have different owners, and reason about the meaning of the data in order to perform the task.

In the inaugural edition of the challenge back in 2003, another ISI system, SECO won the second prize.