Benzel was honored for her sustained contribution with the long-running DETER cybersecurity project, and Knight for his dynamism in recruiting new talent to ISI. 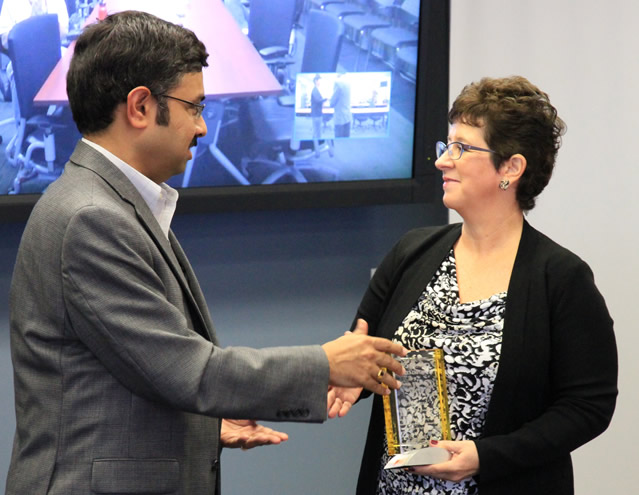 Benzel gave a summary of DETER’s creation, evolution and prescient timing with fast-escalating cybersecurity issues. She also pointed out that “attackers have the biggest testbed in the world,” while researchers – absent DETER – have few ways to test approaches in a real-life environment. Following a 2014 report created jointly with SRI in Menlo Park, she’s now “actively evangelizing” for stepped-up cybersecurity research in the US and internationally. 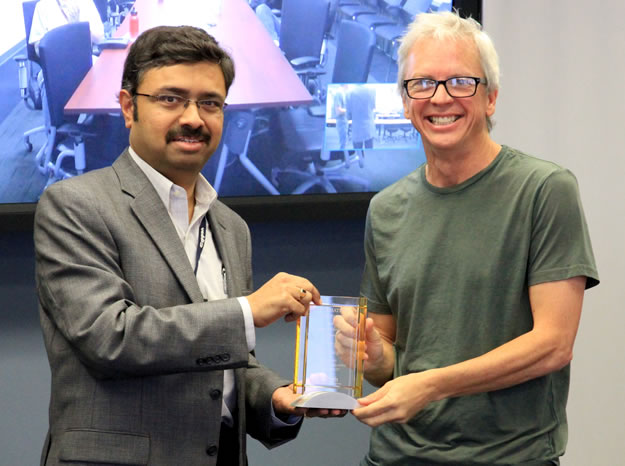 Knight thanked Natarajan and the “mysterious committee,” and outlined how his recruiting trajectory. He’d been wondering what would make ISI “an awesome star quality place in the future,” and the answer was clearly great people. But ISI’s recruiting had tended to be somewhat ad hoc inside and opaque to the outside world. Knight pulled in colleagues Yigal Arens, Daniel Marcu, Pedro Szekely and Aram Galstyn, who launched a website with research opportunities and firm application deadlines. Knight screened everything that came in.

Marcu meanwhile approached the USC Computer Science Department, which now will share its professional applications with ISI. Natarajan announced a new ISI initiative to do shared-project funding for three graduate student interns. He also pointed out that future award nominations can highlight research strides or other meaningful advances, and honorees can include ISI staff. The 2015 Institute Achievement Award winners are expect to be announced at the annual holiday party on Friday, December 18 at Loews Santa Monica Beach Hotel.