The following is a personal account by Neil Siegel, the IBM Professor of Engineering Management at the USC Viterbi School of Engineering, on the passing of his mother, Judith Love Cohen.

A beloved mother, wife, and friend, she was an accomplished engineer, author, and publisher.

Her first passions were dancing and engineering. By age 19, she was a dancer in the Corps de Ballet of the New York Metropolitan Opera Ballet Company, and a student in engineering school of Brooklyn. She met Bernard Siegel, the man who became her first husband and my father, at the end of her freshman year. They were married a couple of months later and made the move west to Southern California.

During the next 10 years, she worked full-time as an engineer, had the first three (Neil, Howard, Rachel) of her four children, and completed both her bachelor’s and master’s degrees in electrical engineering at USC. She liked to be busy.

She started dancing again – recreational folk dancing – around 1964, which she continued until the end of her life.

Judy and Bud divorced in the mid-1960’s, and she soon married Tom Black. Her fourth child, Jack, was born a few years later. She actually went to her office on the day that Jack was born. When it was time to go to the hospital, she took with her a computer printout of the problem she was working on. Later that day, she called her boss and told him that she had solved the problem. And . . . oh, yes, the baby was born, too.

Her engineering career included roles on the teams that created the guidance computer for the Minuteman missile, the Abort-Guidance System in the Lunar Excursion Module for the Apollo space program, the ground system for the Tracking Data, and Relay System Satellite (recently retired after nearly 40 years of operations on orbit!) among others. 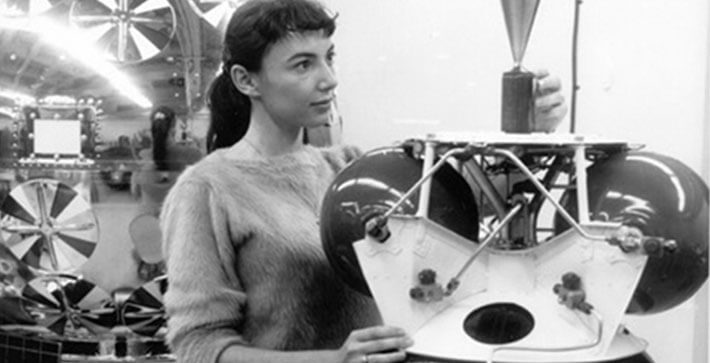 This picture is of Judy with the Pioneer spacecraft in 1959. She and my father worked together on this satellite, which was scheduled to launch in spring of 1959. “Life” magazine decided that a husband-and-wife engineering couple would be a good story, so photographers came to our house in Bellflower and took photos of the family. Unfortunately, the Atlas-Able rocket that was supposed to launch blew up on the pad at Cape Canaveral (you can actually see a video of the explosion on the web!), and “Life” lost interest in the story. A replacement satellite got built, and was going to be launched in 1960 or 1961. “Look” magazine thought that it would do the story. So we had another set of photographers at our new house in Manhattan Beach. The story never ran, but we still have the photos, including this one.

My mother usually considered her work on the Apollo program to be the highlight of her career. When disaster struck the Apollo 13 mission, it was the Abort-Guidance System that brought the astronauts home safely. Judy was there when the Apollo 13 astronauts paid a “thank you” to the TRW facility in Redondo Beach.

She finished her engineering career running the systems engineering for the science ground facility of the Hubble Space Telescope.

During her engineering career, she was a vigorous and tireless advocate of better treatment for women in the workplace. Many things that today we consider routine – the posting of job openings inside of a company so that anyone could apply, formal job descriptions for every position, and so forth – were her creations. She had a profound impact on equality in the workforce.

She and Tom divorced in the late 1970’s, and she later met and married the man who turned out to be the love of her life, David Katz. They had been married 35 years at the time of her death.

Judy retired from engineering in the early 1990’s, and immediately wrote a small book called “You Can Be a Woman Engineer” targeted to eight- to 10 year-old girls. It was intended to encourage them to consider a career in engineering. She was not able to find a publisher, so she and David started their own book company. This led to a new passion and an entire series of titles including, “You Can be a Woman Architect” (co-authored with my father’s wife, a practicing architect), “You Can be a Woman Astronomer,” and many others. Judy sold more than 100,000 of these books; held hundreds of in-person book-readings and seminars; and prepared lesson-kits so that hundreds of other people could do the same. She must have influenced tens of thousands of young girls to become interested in professional careers of one sort or another.

Her husband David illustrated these books, so this was an adventure of love that they experienced together.

She was an ideal mother-in-law to my wife Robyn, especially when Robyn’s own mother died at a relatively early age. She invited Robyn to become a co-author for one of her books. The partnership worked, and she and Robyn co-authored the last 10 or so of the books in the series.

In the last 10 years, my mother acquired three grandchildren, giving her yet another passion.

Her life was not perfect: Her younger sister, Rosalind, died young; there were the two divorces; and she suffered the trauma of losing a child, my brother Howard, who also died young. But she was happy to have reached age 82½ without a single overnight visit to the hospital since age 6, and was busy every minute doing the things that she loved.

We will miss her very much. Neil Siegel Honored for Achievements in AI with a New Fellowship 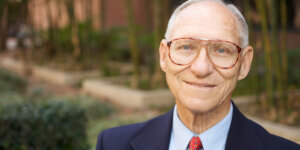