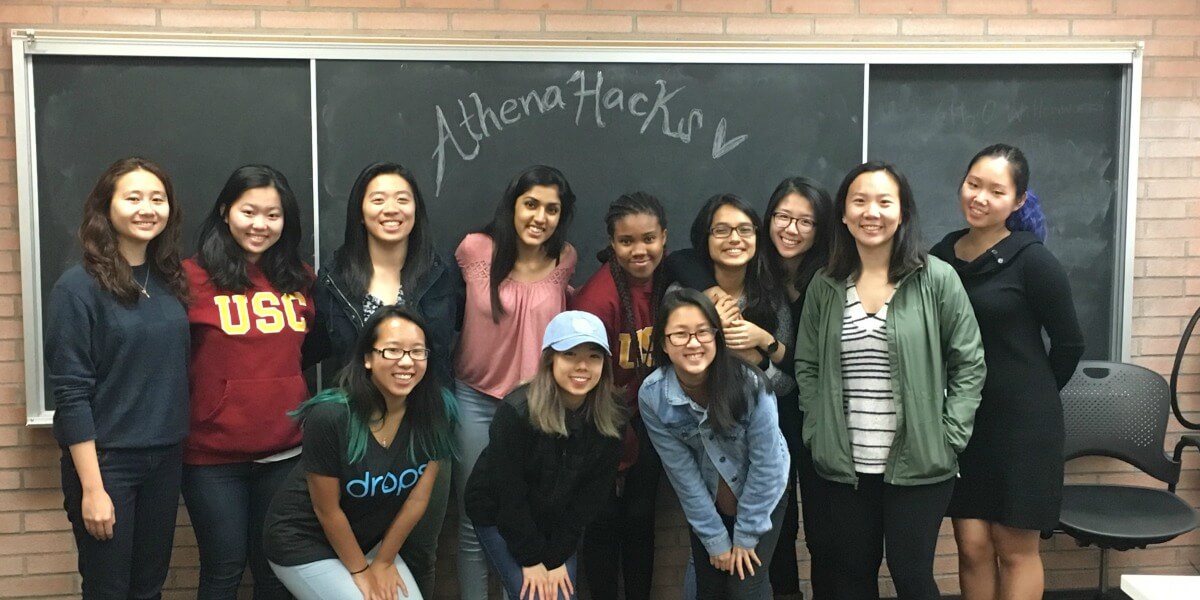 Kelly Lampotang is used to being the girl. Not a girl, not one of many or even one of a few. But the singular female on a hackathon team.

“In fact, I know girls who have never been on a team with another woman,” said the computer engineering and science major at USC Viterbi.

Now Lampotang and a fellow cadre of undergraduates have organized Athena Hacks, a hackathon where they were among hundreds of only women.

Throughout the weekend of April 8 and 9, 310 undergraduate women hackers crammed the Leavey Library basement. Assisted by 40 female mentors, they created everything from mobile games to virtual reality experiences. With Github, Hulu, Facebook, Zynga and Qualcomm among their sponsors, the Athena Hacks team seems off to a promising start to take their Trojan horse and change the hackers culture. “There’s such an unfortunate stereotype about hackathons, college ones especially,” said Lampotang, Athena Hacks’s lead of marketing and outreach. “They don’t have to be all chugging Red Bull and no sleep.”

Lampotang and the all-female Athena Hacks team want to provide more than a temporary quota for USC’s hacking culture. Instead they want to pervade the typical boys’ club hackathon culture.

“Hackathons almost always devolve into a competition for who can sleep the least rather than who can learn the most,” said Yingyu Sun, Athena Hacks’s lead of design and a computer science major.

“It is much more important to walking away from the hackathon with new knowledge rather than one-upping your opponents. That’s what we’re trying to fix, not just at our hackathon, but in the long run.”

Sun met Lampotang when they were two of only a handful of female computer science majors in their dorm.

“We both went to mini all-women’s hackathon in San Diego, and I think it’s a different environment. It’s more collaborative, with everyone throwing ideas around and having fun with it,” said Sun. “A big aspect of Athena Hacks is catering to beginners and encouraging them from a younger age to try out coding.” Targeting interested girls in high school or even younger ones is an integral part of their mission, since, as they note, the discouragement for girls to take on computer science starts early.

“It can be discouraging to look around your classes and see almost no other girls,” added Lampotang. “We hope that Athena Hacks can dispel the myth that hacking and the tech world are only for boys and men.”

“In the future, we hope to spread out from SoCal to the entire West Coast and then maybe nationally,” said Sun. “But really, we just want to help change the culture of hackathons as a whole.”