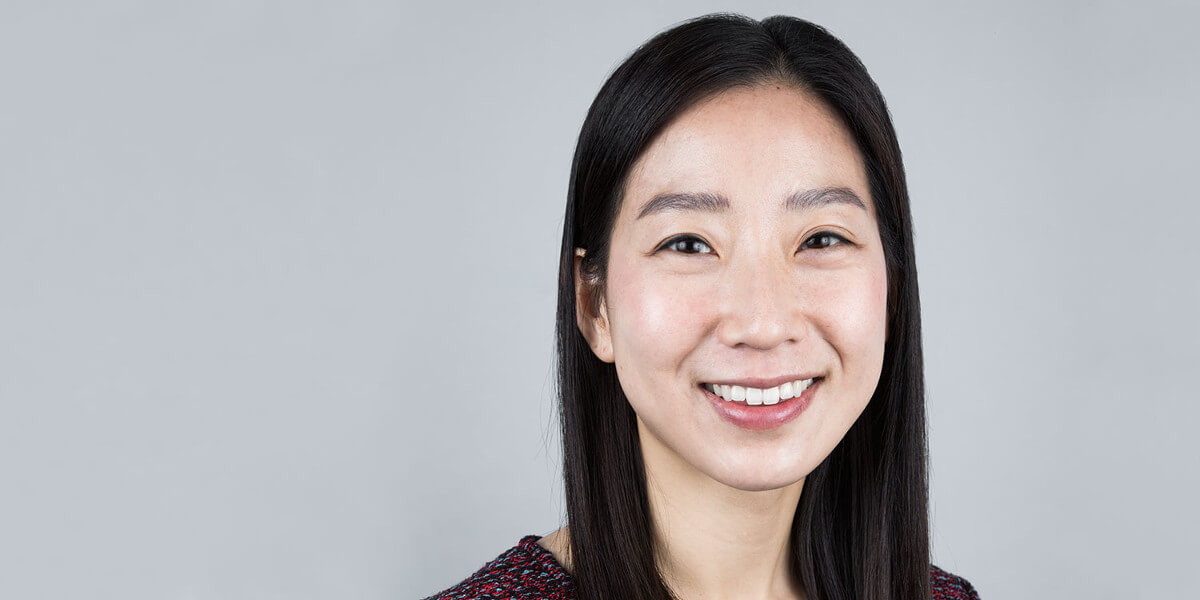 Eun Ji Chung is a Gabilan Assistant Professor in the Department of Biomedical Engineering and recipient of a 2017 AIChE 35 Under 35 Award. Photo credit/Michelle Henry

To describe Eun Ji Chung as “goal-oriented” might be the understatement of the year.

Chung, a Gabilan Assistant Professor in the USC Viterbi Department of Biomedical Engineering, has racked up an impressive number of achievements in 2017 alone.

In addition to receiving a 2017 USC Stem Cell Eli and Edythe Broad Innovation Award, she was selected for the 2017 Emerging Investigator Issue of the journal Biomaterials Science and a 2017 Biomedical Engineering Society (BMES) Career Development Award.

This summer, Chung found out that she was being honored with a 2017 American Institute of Chemical Engineers (AIChE) 35 Under 35 Award for her exceptional work in bioengineering.

People like Chung tend to be driven at a young age, perhaps ever since birth. As an undergraduate at Scripps College, she pursued a degree in molecular biology and conducted biology research in unicellular organisms. While there, her interests became more patient-focused.

“While I had a strong foundation in biology, I wanted to pursue a field that could help human health and patients,” Chung said. “This led me to pursue biomedical engineering as a graduate student (at Northwestern University) and choose a lab that focused on biomaterials research.”

During her post-doctoral training at the University of Chicago, Chung achieved a goal she ranks as her proudest professional achievement: an NIH K99/R00 Pathway to Independence Award for her proposal to develop a nanoparticle that could be delivered intravenously and detect atherosclerosis, a potentially fatal build-up of plaque in the arteries. The nanodevice could also deliver therapeutics and signal whether the treatment was successful.

The first time she applied for the award, her application was streamlined and rejected, but she was determined to succeed.

“Despite the statistics and critics confirming the high likelihood of being streamlined again in the resubmission, I persisted, addressed all of the reviewer comments diligently, and received a top score the second time around,” Chung said.

In her lab, Chung and her research group investigate molecular design, nanomedicine and tissue engineering to generate biomaterial strategies for clinical applications.

In her mentor role, she is emphatic about working with her students (both undergraduate and graduate) and postdoctoral trainees toward their own individual aspirations.

“While it takes continuous dialogue, planning and learning together, every small milestone that we achieve towards the larger goals makes me feel proud and gives me a sense of pride in my work and role,” Chung said.

In the future, Chung’s research goals include providing cost-efficient nanodiagnostics and therapeutics for patients that are not well-understood or overlooked.

To achieve this goal, Chung believes that to achieve this goal requires an interdisciplinary team of scientists, clinicians and trainees. This belief makes Chung an excellent fit as one of the faculty members joining the new USC Michelson Center for Convergent Bioscience when it opens this November.

“In order to train the next generation of the STEM workforce, I hope to inspire students and convey biomedical engineering and biomaterials research as both tangible and compelling,” Chung said.

“In order to train the next generation of the STEM workforce, I hope to inspire students and convey biomedical engineering and biomaterials research as both tangible and compelling.”Eun Ji Chung

Chung describes her pursuit of both an ambitious academic career and family life as a “juggling act” that requires frequent fine-tuning. She has even developed her own system of goal attainment that all starts with putting a pencil to paper.

“Every December, I write out my career and family goals for the upcoming year, as well as any additional personal goals that I might have, and categorize them into a timeline of seasons,” Chung said. “In addition, I have longer, five-year goals. This way, I can approach ambition in a holistic manner.”

Living in a Biomaterial World