Stephanie Kemna has explored the ocean’s depths, without setting a foot in water. The USC graduate computer science student is researching autonomous underwater vehicles (UAVs) that can help scientists safely study the ocean. A member of the Robotic Embedded Systems Laboratory at USC, Kemna’s research is already making a splash.

She was part of a team recently honored with a 2017 NATO Science and Technology Organization’s (STO) Scientific Achievement Award for its work on the Next Generation Autonomous Systems (NGAS) project from 2007 and 2015.

NATO STO is the largest NATO organization for defense science and technology. The NATO Achievement Award recognizes the outstanding contributions made to NATO STO’s sponsored activities that continue to widen STO’s technological mandate.

According to a NATO media release, the team, called the NATO STO Centre for Maritime Research and Experimentation (CMRE) Cooperative ASW team, proposed highly innovative networked autonomous anti-submarine warfare (ASW) solutions based around networks of static and mobile unmanned sensor networks, which have been demonstrated during 13 sea trials.

Kemna contributed to the project prior to joining USC, from 2009 to 2012, when she worked as a consultant researcher at the Center for Maritime Research and Experimentation in La Spezia, Italy. In this role, she investigated ways to improve AUV autonomy and intelligence and the potential for multi-robot coordination strategies.

Originally from the Netherlands, this experience sparked Kemna’s passion for working with autonomous underwater vehicles, and led to her pursuing her PhD in computer science and maritime robotics at USC in 2012.

Working with her advisor Gaurav Sukhatme, a professor of computer science and electrical engineering systems and the executive vice dean of engineering at USC Viterbi, Kemna is now working on programming unmanned robots to collect data for biologists and oceanographers, particularly coordinating multiple autonomous robots to achieve a common goal.

The underwater robots can use sensors to measure water quality, currents or depths and spot potential harm, such as toxic algae, which can be deadly for fish and pose a threat to the food chain.

“For the future, I would like to make a positive impact for our planet through the research I do,” says Kemna, who is now in the final year of her PhD. “For example, by continuing to enhance autonomous vehicles to better serve earth and ocean scientists.” 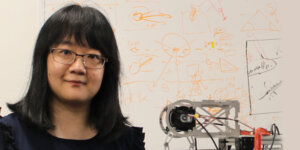