Craniofacial conditions, or malformation of the head and face, affect approximately 600,000 people in the United States, according to Children’s National Health System. Photos/iStock.

Nearly half of all birth defects involve the face and skull and, for the most part, scientists remain unclear as to why most occur. To better serve families at risk for these conditions, scientists need a comprehensive and systematic understanding of how the faces of healthy children form and what goes wrong to cause common malformations, such as cleft lip and palate.

“We’re looking at really challenging problems, which cannot be solved by a single group or individual’s expertise.” Carl Kesselman

With this in mind, the National Institute of Dental and Craniofacial Research (NIDCR) launched FaceBase, a central repository for craniofacial datasets and tools meant to advance craniofacial science by fostering cooperation and collaboration around the globe. Since 2014, USC scientists have been developing FaceBase’s central data hub. That team just received a $12.5 million NIDCR grant to continue the development and expansion of FaceBase into its third phase. The project’s principal investigators are Carl Kesselman,  dean’s professor with the Epstein Department of Industrial and Systems Engineering and director of the Biomedical Data Center at USC’s Information Sciences Institute, and Yang Chai, associate dean of research for the Herman Ostrow School of Dentistry of USC and director of the Center of Craniofacial and Molecular Biology.

“We are very excited and honored to serve as the hub for FaceBase III,” said Chai. “This NIDCR supported Craniofacial Development and Dysmorphology Data Management and Integration Hub will continue to develop towards a comprehensive resource for researchers around the globe and highlights the leadership provided by interdisciplinary researchers at USC to bring oral and craniofacial research to the next level of excellence.”

A fly-through inside a mouse skull, to help better understand craniofacial structures. Video courtesy of FaceBase.

The major goal of the FaceBase Consortium is to advance research by creating comprehensive datasets of craniofacial development and dysmorphologies, or birth defects, and to disseminate these datasets to the wider craniofacial research community.

Craniofacial conditions, a broad term used to describe any disease, defect, or trauma resulting in the malformation of the head and face, affects approximately 600,000 people in the United States, according to Children’s National Health System.

Cleft lip and palate are amongst the most common of all birth defects. In fact, The Center for Disease Control and Prevention recently estimated that in the United States, about 2,650 babies are born with a cleft palate and 4,440 are born with a cleft lip, which can lead to problems with feeding and speaking.

“This ongoing research represents an ongoing and fruitful collaboration in multi-disciplinary bioscience between the Viterbi School of Engineering and the Herman Ostrow School of Dentistry,” said Kesselman, who is also director of the Center for Discovery Informatics in the USC Michelson Center for Convergent Bioscience.

“We’re looking at really challenging problems, which cannot be solved by a single group or individual’s expertise. Together, we can better develop and apply advanced computer science and information management techniques to solve problems in cranio-facial dysmorphia that would otherwise be inaccessible.”

FaceBase launched in 2009, with research focused on the middle region of the face and the genetics related to developmental disorders. The data collected from these projects created an unprecedented, freely available resource for the scientific community. Since then, projects have expanded to include other regions of the face and skull.

This third phase aims to continue work on the data repository, motivate craniofacial researchers around the globe to share their own research data and foster a community of active users through outreach activities and dissemination of new features and available data sets. Past FaceBase contributors have included researchers from more than 24 universities nationwide. 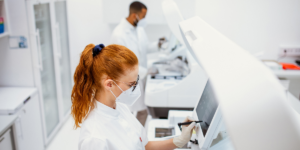 The Reproducibility Crisis in Science – These Researchers Have a Fix