Ghena Alhanaee is only the second doctoral student at USC to achieve a TR 35 distinction before graduating. Photo courtesy of Ghena Alhanaee

Ghena Alhanaee, a Ph.D. candidate in the USC Viterbi School’s Sonny Astani Department of Civil and Environmental Engineering, has been named one of the top 20 innovators under age 35 in the Middle East and North Africa (MENA) region by MIT Technology Review Arabia.

She is only the second doctoral student at USC to achieve this TR 35 distinction before graduating, following Niki Bayat, Ph.D. CHEM ENG ’18. The annual list recognizes outstanding innovators who are younger than 35 and whose technical work promises to shape the coming decades. Bayat was honored in TR 35’s global list in 2018.

Alhanaee’s research focuses on environmental sustainability, energy resources, water and food security. She is designing a framework to prevent and prepare the Persian Gulf region in the event of a disaster.

“One-third of oil production is in The Gulf and so is half of the world’s desalination,” Alhanaee said. “Now, add nuclear energy to the mix. We have one reactor operating in Iran, four being built in the U.A.E. (United Arab Emirates) and at least two planned in Saudi Arabia. These three industries are heavily reliant upon each other. If disaster occurs in one of these it will impact the other two.”

Alhanaee explained that although these industries are interconnected, they work independently of each other operating under their own rules and standards.

“I cannot do this alone. It requires support from the scientific community in the region and more research backing to say this is important.”

Sharing the same body of water with Iran, Iraq and United Arab Emirates among others, Saudi Arabia, one of the most water starved nations on earth, relies on desalinated Gulf water to produce about half of the fresh water supply for its 33 million people. It is now building nuclear facilities on its coast and will also use desalinated water to cool them down. With nearly 13 percent of the world’s oil production in Saudi Arabia, if a Deepwater Horizon-like spill were to happen, nearby desalination plants would likely shut down sending ripple effects into the region and the world.

To prevent such a catastrophe, Alhanaee is working to create a linked emergency response plan not just across industries but also across countries, an effort that requires engineering diplomacy – the fusion of engineering, technology and scientific research with foreign policy. She envisions a cross-country governing body that all countries have a seat on and a unified plan in place. Her first step is to model these interdependencies and present them to scientists, engineers and policy makers in the MENA region.

In recent years, engineering diplomacy has become a key issue at USC Viterbi. In 2018, The U.S. Department of State selected USC — with the USC Viterbi School as the hub — as a partner institution for Diplomacy Lab, a program designed to provide students and faculty with hands-on experience on global policy challenges.

“I cannot do this alone. It requires support from the scientific community in the region and more research backing to say this is important,” Alhanaee said.

She has presented her work internationally, from North America to Europe and the Middle East.

Alhanaee earned her master’s in energy resources engineering from Stanford University and her bachelor’s in mechanical engineering from The Petroleum Institute in her hometown of Abu Dhabi. Prior to her graduate work, she served as a research fellow at NASA in Mountain View, California, where she worked on bringing hands-on space exploration experiences to students and scientists.

At USC Viterbi, Alhanaee is in her final year of completing her Ph.D. under the supervision of Professor Najmedin Meshkati, a leading expert in nuclear safety culture.

“USC Viterbi has become my home away from home and for this I will always be grateful,” said  Alhanaee who also serves as the Viterbi Graduate Student Liaison through the Viterbi Admission and Student Engagement Office.

“I truly believe that Ghena’s unprecedented research topic addresses one of the most important and crucial issues affecting the future of the Persian Gulf and its eight littoral countries with a population of over 160 million people,” said Meshkati. “I am confident that the impact of her research can significantly help to prevent and mitigate the dire consequences of a major disaster in a geopolitically and ecologically sensitive region of the world.”

The TR 35 award bears special significance to Alhanaee as one of the few women in the U.A.E. pursuing a Ph.D.

“I’ve been able to do this thanks to the support of my family, but not everyone has that,” she said. “I have been blessed to have the variety of research experiences and an authentic cultural immersion at USC. Beyond making my family proud, I hope this award encourages more Arab women to travel and to further their education.” “We Are The Generation We’ve Been Waiting For” 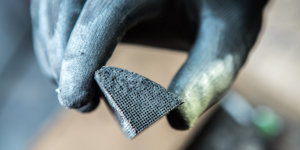