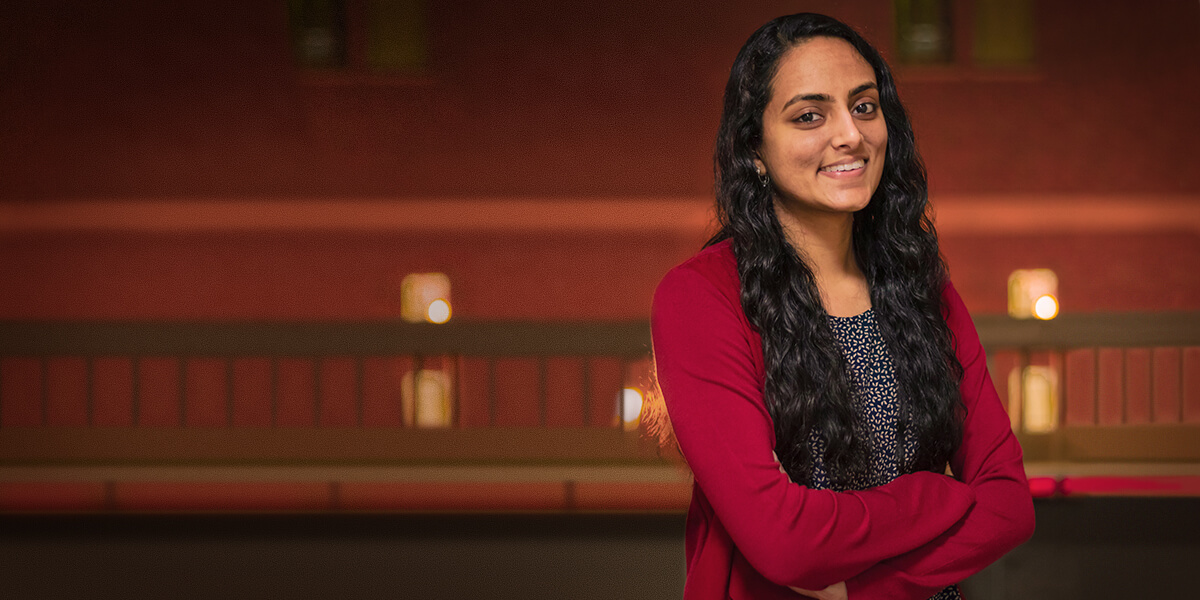 It may seem like Nimisha Patil is living two different lives — designing medical sensors by day before transforming into her alter ego, beatboxing performer “Nimitz Beatbox,” at night. In fact, these two lives are really just two sides of the same coin for Patil, who received bachelor’s degrees in both biomedical engineering and film production from USC in 2017. Although she always had an interest in both science and art, it wasn’t always so clear to Patil that she could actually marry the two.

“It wasn’t until joining USC Viterbi that engineering gave me a deeper insight into my art,” Patil said. “It opened up a whole different lens on how to look at music and design.”

“USC Viterbi not only allows interdisciplinary work but actively encourages it, and even supports students who choose to do so.” – Nimisha Patil

As a student, Patil did a dual degree in biomedical engineering and film production. Along the way, she spent three years conducting research in Professor Shri Narayanan’s SAIL lab in the Ming Hsieh Department of Electrical and Computer Engineering. Narayanan’s research aims to bring engineering solutions to a host of societal challenges, and one of his focuses is on linguistics and communications. As one of her SAIL projects, Patil was part of a team that used MRI technology to look at how the human throat, mouth and tongue work together to make the sounds used in beatboxing.

“That was the first time I had a chance to dissect art from a scientific lens,” Patil said. “Although I had already been beatboxing for years, I never really thought about the science and mechanics behind what I was doing.”

Using real-time MRI, a cutting-edge technology the SAIL team employs, Patil saw beatboxing from the inside out in a way she never had before. Through the images she captured in the lab, and the more she learned about linguistics in general, she began to appreciate the layers and depth behind beatboxing, even gaining a deeper respect for her own art.

This new perspective has had a direct impact on her work as an engineer as well. Today, she works at Medtronic in Northridge, California, as part of a team that designs medical devices. Patil’s interdisciplinary experience has allowed her to include more creativity in the design aspect of her work. Designing medical products often involves modeling software that requires the engineer to conceptualize as-yet-unbuilt devices in a 3-D space. Patil’s background in the arts has greatly improved her ability to think about and visualize her designs.

As natural as her interdisciplinary work in music and engineering seems today, there was a time when Patil was afraid she would have to pick between the two. However, USC Viterbi’s commitment to interdisciplinary studies made her choice an easy one.

“USC Viterbi not only allows interdisciplinary work but actively encourages it, and even supports students who choose to do so,” said Patil, who graduated with a USC Renaissance Scholar distinction, a program that recognizes students who are focusing on two very different fields while maintaining a high GPA.

Patil is eager to share her advice with young engineering students who may also struggle with fears about how to balance their love of engineering and art. “Don’t doubt yourself, and try not to worry so much,” she said. “I truly believe that if you do what you want to do, not what you have to do, you will eventually find your place in the world.”