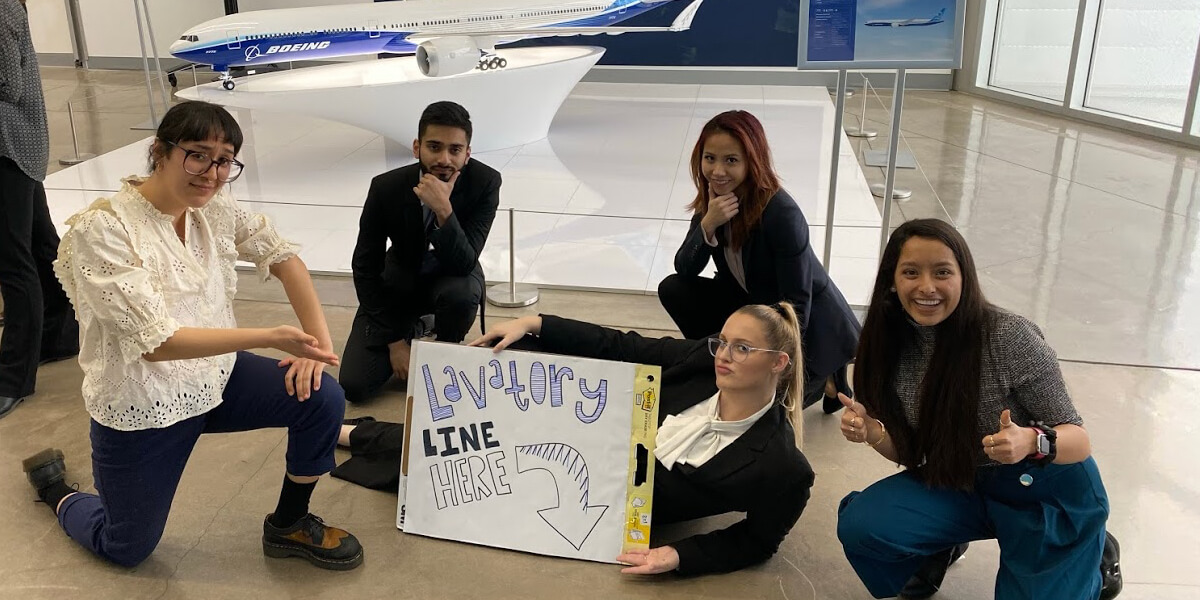 To say that Hannah Sandeen loves Disneyland would be something of an understatement. An annual passholder since 2001, the USC Viterbi mechanical engineering major said she has experienced the best of times there.

The 22-year-old transfer student from El Camino College also has made several important observations during her many excursions to the “happiest place on Earth.” Specifically, she marveled at Disneyland’s FastPass system that allows visitors to reserve their place in line for the park’s most popular rides manually or via an app. Sandeen noted how the system permits visitors to avoid wasting time standing in long lines. Instead, they simply show up at a designated hour and enjoy their favorite attractions, hassle free.

So, when she and two other USC Viterbi students entered the 2nd annual Boeing Innovation Challenge, Sandeen had a good idea to solve a real-world aviation problem. Building on her experiences at Disneyland, she and her teammates proposed creating an app that would allow airline passengers to reserve a place in line for the lavatory without leaving their seats. When the restroom came available, passengers would receive notification via the app or the airplane’s online entertainment center.

“That way, they only need to get up when they need to, and they can relax in their seat without ever having to get up and down a bunch of times,” said Sandeen, adding that passengers would need to punch their seat numbers into a keypad on the lavatory door to forestall line jumpers.

“What we were looking for, and we found, is for the students to demonstrate not just technical, academic and problem-solving knowledge but also innovation, ideation and the ability to work together as a team,” said Mithra Sankrithi of Boeing Commercial Airplanes Product Development, who oversaw the challenge.

Nearly 60 student teams from across the country participated in the competition, which began in September. Those teams, representing a dozen schools, offered 70 concepts for consideration. After the first round, company judges and student participants narrowed the field down to the top 10 teams. At that point, some students who proposed ideas that did not advance joined the remaining squads. In late January, 51 students flew to the Puget Sound, at Boeing’s expense, to develop their ideas on teams composed of students from multiple universities, with the help of company mentors during a two-day hackathon. The teams then pitched their ideas at the Future of Flight Museum in Mukilteo, Washington.

Sandeen of the Cosmic Trojaneers said her team’s victory illustrates the value of USC Viterbi’s emphasis on both in-class and hands-on learning.

“At USC Viterbi, we’re not just students in a classroom working toward a grade,” said Sandeen, who recently received an offer of a Boeing internship. “We’re much more than that.”

“To do so well in something as competitive as the Boeing Innovation Challenge – and something outside of” [my field] “is a testament to how Viterbi emphasizes a diverse and adaptable education,” he said.  Shiva Balachander, a USC Viterbi freshman, also was a member of Nicka Time.

Third-place finisher, USC Aviation Crew, was headed by Parker Banfield, a senior at the USC Marshall School of Business, and Michael Loy of the USC Annenberg School of Communication and Journalism. Their idea called for building modular kennels in sections of under-utilized cabin space in commercial aircraft.

Renteria of  theCosmic Trojaneers said she felt proud of the USC triumph at the Boeing Innovation Challenge.

“My peers and I are incredibly prepared to undertake any challenge,” she said. “Our determination and critical thinking was put to the test, and, ultimately, we emerged victorious.”