Very much like the muscles that move around the bones in your hand, soft robot technology is composed of malleable structures which automatically and intelligently create movement. Undoubtedly, this description sounds like how humans and other organisms operate, so it doesn’t come as a shock that various biological creatures are a big inspiration behind this technology.

In fact, the malleability of the starfish species inspired researchers at USC’s Space and Engineering Research Center (SERC) to create a new solar-powered soft robotics device called none other than STARFISH, which stands for “Soft Translatable Advanced Robot For In Space Handling”. This robot structure combines EA, or electro-adhesion technology, and soft robotics to inspect complex structures in space.

Soft robotics finds its place in various fields of study today. In the medical industry, soft robotics may be useful in creating miniature expandable objects which can be inserted into one’s veins in order to clear up whatever may be causing blockage. However, the use of soft robotics in space exploration is still a novel process and may require a lot more trial and error than previous terrestrial use of the technology.

Despite the name, there’s nothing fishy about this new venture. Building off the previous success of REACCH, a SERC project that was inspired by the tactical abilities of an octopus, the program’s director as well as USC Viterbi professor David Barnhart and his student team looked to the starfish as a model for their newest project. STARFISH, like its predecessor, utilizes EA energy which creates polarizing adhesion between surfaces by encouraging static interactions between positive and negative charges. Essentially, two opposing pads create one pulling force that allows an object to grip to a surface.

STARFISH was created to monitor large structures that orbit space. With its unique EA technology and highly malleable body, it’s able to grip onto these structures in space and move around to inspect for any abnormalities at various attachment points. A camera or sensor is positioned at the body of the robot to ensure that it’s highly susceptible to any changes or errors and can readily report these. Now you might be wondering — isn’t this a job for the astronauts out there?

As of now, STARFISH is ahead of the game in the realm of monitoring space exploration. “The primary mission behind wanting to create STARFISH is to solve a problem that at the moment, we don’t have in space,” explained Barnhart.

That’s to say there are rigorous inspection procedures in place for any type of structure that goes out into space; however, STARFISH is geared towards thoroughly assessing the structures that are actually manufactured in space, where there’s no validation testing available other than from human astronauts. But we’re talking about structures which can span up to a kilometer, which doesn’t sound like a job any human would like to do!

If you weren’t enticed by the starfish-inspired design aspect, it gets even better — Barnhart and his team are working hard to make STARFISH a low-cost device, thereby potentially increasing accessibility and usage across disciplines. This could also greatly widen the horizons of technologies like STARFISH, making soft robotics an essential part of future technologies that we encounter in our daily lives.

“The idea we can create a very soft, pliable, walking/crawling robot means we could create something that could be used in disaster response, basement or crawlspace inspections, or even in real time video monitoring of hazardous materials,” Barnhart said.

Though very promising, this project is in its early stages. According to Barnhart, a few key technical challenges are currently being addressed in order to ensure full compliance of the robot. But he’s positive that things are looking up for soft robotics. “We believe the biologically inspired objects like STARFISH will play a large part in the future of Space Exploration!” he said. 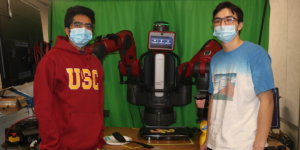