Motor neurons (green) are grown on top of skeletal muscle (red). The blue stains show the nuclei of the cells. Image/USC Laboratory for Living Systems Engineering

Neuromuscular diseases are debilitating and mostly incurable, affecting 160 out of every 100,000 people worldwide. Disorders such as ALS and multiple sclerosis impact the function of muscles, causing muscle wastage and loss of motor function. A major hurdle in the fight against these diseases is the fact it is notoriously difficult to grow tissue in a lab that shows the connection between our muscles and the neurons that control them. Until now.

A biomedical engineering Ph.D. student at USC Viterbi School of Engineering joined forces with researchers from the Keck School of Medicine of USC and USC Dornsife College of Letters, Arts and Sciences to create a vastly improved new lab-grown tissue model that offers a more stable view of the neuromuscular junction — an important part of our system that translates electrical impulses generated by the neurons in our spine into electrical activity and movement in our muscle fibers.

The research has been published in APL Bioengineering and was led by Jeffrey Santoso, a Ph.D. student in the Laboratory for Living Systems Engineering, led by Megan McCain, the Chonette Early Career Chair and associate professor of biomedical engineering and stem cell biology and regenerative medicine. Santoso also collaborated with the labs of Justin Ichida, who is the John Douglas French Alzheimer’s Foundation Associate Professor of Stem Cell Biology and Regenerative Medicine and a New York Stem Cell Foundation–Robertson Investigator, and Dion Dickman, associate professor of biological sciences.

Santoso said the neuromuscular junction is a highly-structured connection, with pretzel-like folds that increase the area for communication between a neuron and a muscle.

“The neuromuscular junction is the space where the neuron will release signaling molecules called neurotransmitters, which will then bind onto receptors that are located on the surface of the muscle fibers,” Santoso said. “And when these molecules attach to those receptors, it causes the muscle cell to be depolarized — so there’s a voltage change — and that’s what causes your muscles to contract.”

Above: The researchers grew skeletal muscle on a gelatin hydrogel. Here they test the strength of the various tissues’ contractions when exposed to slow (twitch) electrical stimulation, or higher frequency (tetanus) stimulation.

In neuromuscular diseases — as well as in the natural aging process — there is often stress, or a break in connection, within the neuromuscular junction. Having accurate lab-grown tissue models is crucial for understanding age-related degeneration, or the progression of neuromuscular disease, as well as the most effective treatments. However, researchers have struggled to replicate this complex connection, or innervation point, in lab models when they try to grow muscle fibers and neurons together.

“Traditionally, when muscle and neurons are grown together in a dish, the expected structure at the innervation point is absent,” Santoso said, “leading to a functionally inept tissue that does not represent proper physiology, making it hard to draw conclusions about diseases and potential drugs.”

As a result, previous tissue models tend to die after two weeks. To create a more useful lab model, Santoso and his co-authors have engineered a gelatin-based gel platform that allows a skeletal muscle to grow in the lab in its proper aligned architecture, maintaining its structure for at least a month, and generating contractions similar to the strength of native human tissue.

“When you try to grow the tissue in the lab, it usually involves growing muscle cells in a layer and putting the neuron cells on top,” Santoso said. “The junction that forms doesn’t create a structure of these pretzel-like folds, and so this causes a variety of issues, because it might not respond to certain drugs as you would expect.”

Santoso and his team combined their lab-grown skeletal muscle with human stem cell-derived motor neurons developed in the Ichida lab. They found that the muscle successfully formed more structured neuromuscular junctions, which were characterized with the Dickman lab.

Santoso said that previous tissue models often used stiff plastic or glass dishes that did not offer the right kind of protein environment for the tissue and often caused muscle cells to peel away when contracted, resulting in the death of the cells.

“The gelatin hydrogel that we’re using, as a natural biomaterial, is naturally adhesive to the skeletal muscle cells, and this is one reason we were able to see our tissue model maturing much further than a lot of other previous models,” Santoso said. “The skeletal muscle can survive on the surface for a longer period of time, and having this increased time in the culture means that when we introduce the motor neurons to the culture it can fully integrate to create that neuromuscular junction.” The neuromuscular junction: The motor neuron is shown in green,. The researchers added a white stain for acetylcholine receptors. This overlap in a distinct folding pattern is key for junction development and reliable signaling. This structure does not form easily without the longer culture times provided by the new gelatin hydrogel process. Image/USC Laboratory for Living Systems Engineering.

Santoso said that studying neuromuscular disease was especially challenging, because the human neuromuscular system is so complex. Motor neurons reside in our spinal cords and must go through an elaborate pathway of connections in order to reach all the muscles in our bodies.

“There are so many places in this pathway where things can go wrong,” Santoso said. “Because of this, you need that laboratory model to be pretty close in function and structure, compared to what you see in living beings.”

This project was originally funded by an Eli and Edythe Broad Innovation Award in Stem Cell Biology and Regenerative Medicine at USC to the McCain, Ichida, and Dickman labs.

The interdisciplinary research team is now looking to expand their collaboration so they can apply their engineered tissue platform to model a variety of human diseases with patient-derived cells.

“At the moment, neuromuscular diseases only really have palliative treatments, where they can only delay the severity of some of the symptoms. There’s not really a good way to reverse or prevent the damage.” Santoso said. “Making these kinds of models and trying to parse out the mechanisms of the disease might give us a better idea of how we can develop therapeutics to better alleviate the symptoms, or ideally, to remove them.” 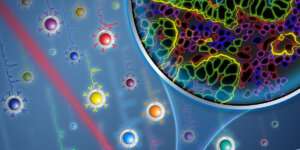