Ridesharing remains a popular way to get around in Los Angeles, but what about ridesharing to get to space? The SpaceX Smallsat Rideshare program offers a viable and affordable option to launch up to 200 kg into a sun-sychronous, low Earth orbit. That is why, along with approximately 80-90 other satellites, USC’s Dodona satellite—it’s third ever—hitched a ride on SpaceX’s latest mission, Transporter 3 this week. Partner Lockheed Martin supported USC students (graduate and undergraduate) and faculty to take an internally built Cubesat (measuring 30 cms by 10 by 10, called Dodona) the size of bread box and test Lockheed Martin’s newest payload technologies in orbit, including new software that allows for rapid mission changes while in orbit. This SmartSat™ technology is part of Lockheed Martin’s larger La Jument program, and Dodona is the first is a series of demonstration flights.

Dodona is a project out of USC’s Space Engineering Research Center, directed by Professor David Barnhart, which is a joint research center from USC Viterbi School of Engineering Department of Astronautical Engineering and the Information Sciences Institute.

Said Tom Smith, vice president for Lockheed Martin’s Centers of Excellence that include Optical Payloads: “The La Jument integrated payload was designed by Lockheed Martin and then integrated and tested with Dodona by USC students at the Space Engineering Research Center (SERC). The La Jument 3U payload on Dodona will be the first satellite to fully use Lockheed Martin’s SmartSat™ software-defined satellite architecture on its payload. It’s a game changer for space because we can easily update satellites after launch and use advanced AI algorithms in orbit instead of just on the ground.”

The La Jument payload suite includes low SWAP (size, weight and power) optical and infrared cameras that employ algorithms to enhance imagery in-orbit, plus Lockheed Martin’s Compass advanced mission planning app. The Compass team developed a new Target Selection Visualization tool which makes it much easier to identify a targeted region to photograph. Using a map overlay, users can pick a point on the map within the satellite’s coverage area and the tool translates that into messages relayed back to the USC team commanding the satellite.

Alongside Lockheed’s new technology suite, the SERC team is testing a new “B dot” controller—a new guidance control algorithm that interacts with the Earths magnetic field to stabilize the satellite in orbit.

SERC launched its first satellite, Careus—developed in partnership between USC and Northrop Grumman—in 2010, and its second, Aeneas in 2012. The process of developing and launching a satellite requires vigorous design work and testing, including “shake and bake” testing, which literally checks how the satellite fares when shook and heated to simulate launch. Satellites also must adhere to global regulations, including making sure the team can bring the satellite down within an agreed upon period of time and ensuring the satellite’s orbit will not interfere with other satellites. For Dodona, the team also needed to receive FCC approval for operating its small radio, an off-the-shelf radio made for Cubesats so the satellite can both receive commands sent up from the ground station (located on USC’s University Park campus) and downlink data on the health and status of the satellite while in orbit. Lockheed Martin will operate a similar ground station at its Valley Forge facility in Pennsylvania.

In the following two weeks, the USC-Lockheed Martin team will assess mission success criteria, including the satellite’s launch into and stability in orbit and its ability to transmit data about what’s happening on the spacecraft. The mission is focused on Lockheed Martin’s optical payload, and will be the first satellite from USC able to take photos of the Earth from space.

Part of SERC’s mission is creating hands-on opportunities for students and faculty to build and test advanced space technology, in addition to integrating, launching and operating small satellites. Dodona takes advantage of the space focused curriculum through analysis tools and techniques that are taught at USC through the Astronautical Engineering Department.

SERC’s next small satellite project is Magneto, a fully student-built class project it hopes to launch in late 2022, and has a new rendezvous technology planned to fly inside the International Space Station in early 2023. 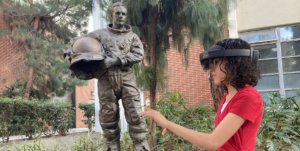