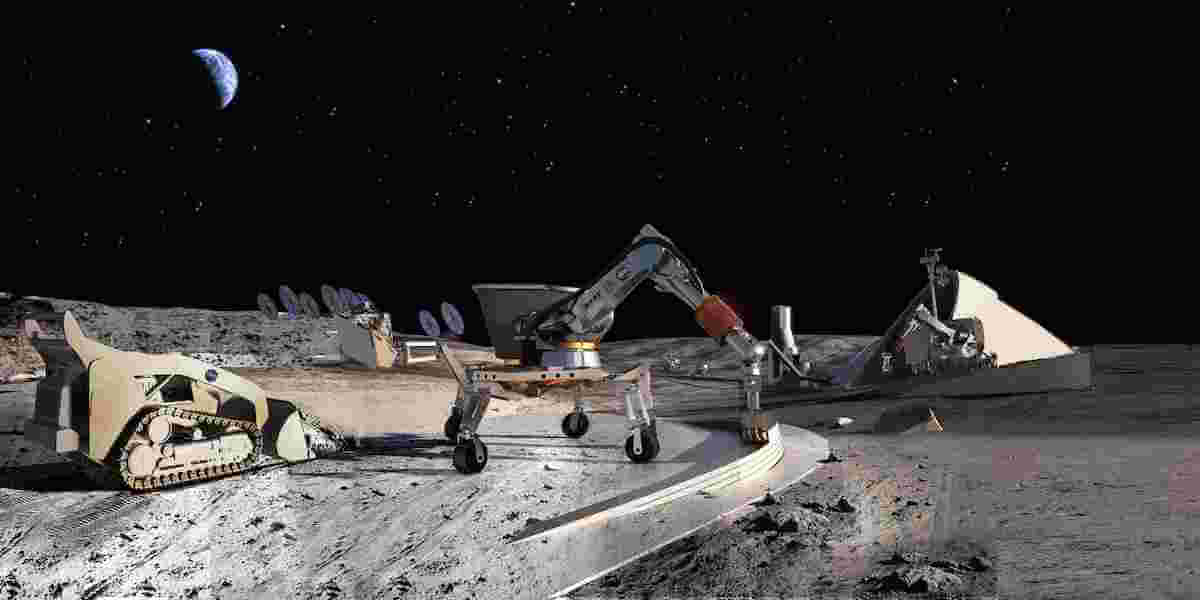 “That’s one small step for man, one giant leap for mankind,” Neil Armstrong, M.S. ’70, famously said after landing on the moon.

Apollo 11 was a huge milestone in humankind’s quest to travel to and explore space. Now, with NASA’s Artemis program, we look ahead to the next milestone: landing the first woman and first person of color on the moon.

To support this, Artemis aims to establish the first long-term presence on the moon, which will require construction of a basecamp on the surface of the moon. For this mission, scientists expect the rockets will be more powerful than Apollo, meaning landing and takeoff on the moon will spread rocks and soil in different directions. The landing area would thus need to include a landing pad and an elevated ridge, or berm, that can protect the lunar surface, astronauts and equipment from the projectiles that landing and takeoff produce. But construction on uneven and rough terrain is difficult, even on Earth. Traditional tools, like heavy trucks that carry materials back and forth, could damage the lunar surface and also prove inefficient in navigating rocky, sandy, narrow and vulnerable terrains.

To this end, NASA awarded a grant to Contour Crafting, founded by Behrokh Khoshnevis, professor of civil and environmental engineering at the USC Viterbi School of Engineering. Additional funds were awarded to USC Viterbi Professor Lucio Soibelman, a partner of the project, to enable the development of a tram-like technology that can support lunar construction without damaging the surrounding area.

But when you consider space construction, traditional methodology just doesn’t work, he said. “It would be very difficult to have intelligent robot trucks drive through difficult terrain. They would also have to use a lot of energy to carry the load, and there would be a lot of opportunity for failure.” Furthermore, flying such heavy and bulky equipment to the moon would require large rocket cargo space and lots of rocket fuel.

Instead, Khoshnevis, devised a technology called CrafTram that is lightweight and low impact. CrafTram works like a chair lift on a ski mountain, carrying  buckets of materials without driving over the terrain. Unlike the chair lift, the tram is mobile, meaning that both source and destination can change autonomously so that the system can move from one construction site to another.

Beyond lunar applications, the team sees the potential for the new technology to create more efficiencies on a wide array of construction sites on Earth.

Said Khoshnevis, “It’s not just the automation aspect of this concept that helps on construction sites, but also just a mode of transportation. Construction sites are typically disorganized; there is a lot of stuff on the ground, which makes it hard for vehicles to go through indirect paths. With this approach, the materials will fly over the site and can also traverse different elevations.”

Ready for Blast Off

The CrafTram system is built to facilitate building lunar outposts, while also considering load limitations for travel to the moon. Khoshnevis and Soibelman have approached construction from diverse and innovative perspectives, looking at how to make it more efficient.

“CrafTram collapses to take up the minimum amount of space possible during flight, and then self-expands once it is deployed on the moon,” said Khoshnevis, who holds the Louise L. Dunn Endowed Professorship in Engineering.

At the same time, lunar gravity is nearly one-sixth what it is on Earth, meaning the buckets can carry even more load than on Earth, Khoshnevis said.

In the first six months of the project, the team will build a one-third scale berm using the CrafTram technology for proof of concept. This will be made into a full-scale prototype in Phase II of the project, Soibelman said.

Changing Construction from the Sky Down

What happens in space doesn’t have to stay there, and in fact, the team behind CrafTram would prefer it doesn’t.

Instead, Khoshnevis and Soibelman are already extrapolating lessons learned from construction in space, which imposes lots of limitations, to different construction parameters and scenarios.

Said Soibelman: “I’m very interested in exploring how we can operate at a distance.” While the future of construction might heavily include robotics, Soibelman said, today’s construction environment has a lot of complexities and conflicts between different tasks. “This is why we need to go to an intermediate step – a little bit more artificial intelligence, but with remote control by humans. If we do this, we can increase safety – removing workers from the danger zone – and bring a diverse set of individuals to construction jobs including women and those who are differently abled.”

“I have a lot of interest in exploring this technology and there is no better opportunity to do so than with this project with NASA,” he added. “If we can figure out how to remotely construct using robots on the moon, it’ll be even easier at a smaller distance, like from the U.S. to India.”

For Khoshnevis, the terrestrial applications of CrafTram in moving materials from source to destination, even if either point is moving, are myriad. “In many construction sites, there is difficult access for concrete mixer trucks, like on deep excavations with steep ramps, or excavated pile foundations where the removed soil creates extremely muddy surfaces. In these cases, engineers and construction companies are often forced to keep the truck outside the construction site and pump concrete from the truck/pump to the pouring position. Many times, the long distances from the pump location to the pouring location require the installation of long lines of pipes with significant loss of concrete in those pipes at the end of the pouring process,” he said. CrafTram would make this process easier and more efficient.