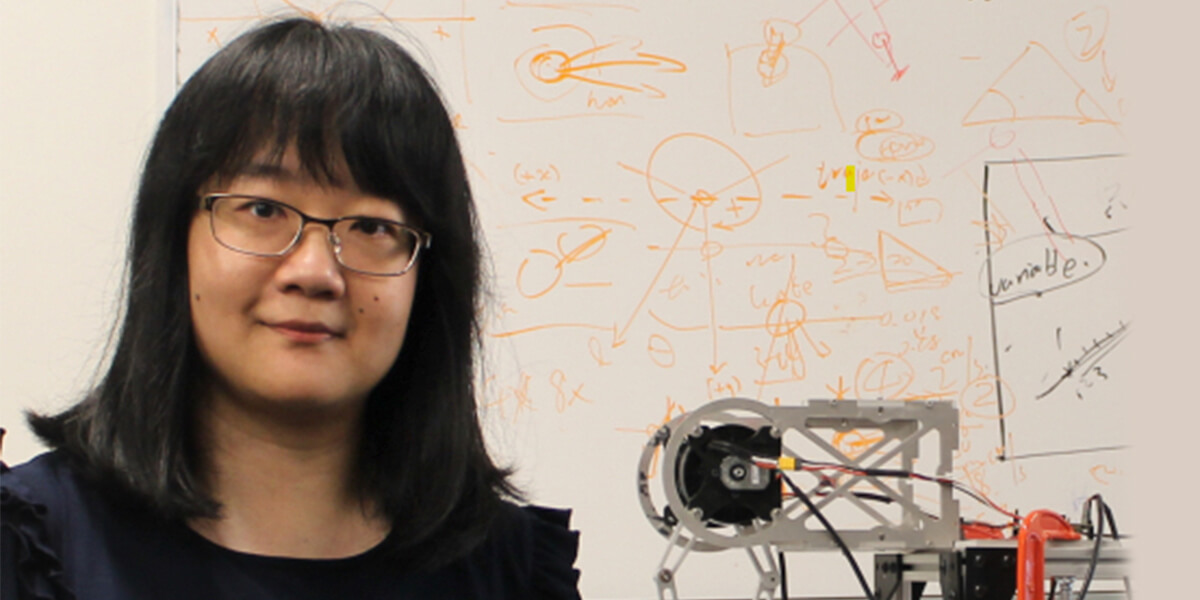 Every night across the globe, people look up and see the moon. Some nights, it appears as a small sliver; other nights, it is full and lights up the dark sky. What is this satellite made of? Does it have water? Has it ever sustained animal or plant life?

Robots have long assisted scientists in answering these and other questions about the moon and the planets that grace our solar system. However, today’s rovers have generally had wheels that could get stuck in planets’ terrain, sometimes causing them to abort important exploration missions.

Feifei Qian, a WiSE Gabilan Assistant Professor at the USC Viterbi School of Engineering, is leading a three-year project funded by NASA to create legged robots that could more easily glide through icy surfaces, crusted sand and other difficult-to-navigate environments, significantly enhancing scientists’ abilities to gather information from planetary bodies.

The overarching goal of this endeavor is to understand how to integrate robotics technology with both planetary science and cognitive science, to improve robot-aided exploration of planetary environments. Essentially, this project aims to create next-generation high-mobility robots and rovers that can easily move through planetary surfaces and flexibly support human scientists’ exploration goals.

This project employs “bio-inspired” robots with legs, meaning their form is modeled after animals’ unique abilities to move well on challenging surfaces like soft sand. Utilizing the latest “direct-drive” actuator technology, these robots can “feel” the terrain (e.g., sand softness, rock shapes) from their legs. This ability allows the legged robots to interact with the environment in the same manner as animals, adjusting their movement as needed.

As lead investigator Qian puts it, these robots are modeled in a manner that allows them “to not just mimic how the animals look, but really understand what makes these animals successful on different terrains.”

The ability to “feel” the terrain using legs also allows these legged robots to easily gather information about the environment as they move around, and adjust exploration strategies based on this information. Integrated with additional scientific instrumentation, these robots can collect a large amount of useful information as they walk around planetary surfaces.

“For the many planetary environments that we would like to explore, we would like to send rovers and robots to gather information before sending humans,” said Qian, “Even for environments where it’s safe to send astronauts, mobile robots can integrate scientific instrumentation and help take precise measurements while moving around.”

While the Mars Exploration Rovers and other robots have been successfully sent into space, they typically operate based on pre-programmed agenda, which means human scientists and engineers need to input detailed instructions on where to go, and what to do, prior to the robots’ arrival at the planet. As a result, when the robot encounters any unexpected scenarios or discovers any interesting measurements, it has limited capabilities to adapt its plan. This could hinder the robots or rovers’ ability to effectively navigate the new environments, or even miss out on opportunities to make important scientific discoveries.

Qian’s research project, LASSIE, meaning Legged Autonomous Surface Science In Analogue Environments, seeks to make it possible for robots to simultaneously move more effectively in various environments while gathering information about them. This information has the potential to allow researchers to understand more about what these planets look like and how they react to disturbances. By understanding how human scientists interpret this information and adapt their exploration plans, roboticists and cognitive scientists on the LASSIE team will together create intelligent robots that can begin to make exploration decisions “like a scientist”. One of the questions guiding this research, said University of Pennsylvania Professor Doug Jerolmack, a co-investigator, is “how do we exploit a robot most efficiently, so it takes on some of the burdens of decision making?”

The NASA project will fund Qian and her team to test these legged robots at locations such as Mount Hood, Oregon, and White Sands, New Mexico, which mimic the terrains of planets such as Mars and the moon. Analyzing how Qian’s bio-inspired robots perform on earth will allow researchers to make tweaks before the legged robots. USC Viterbi’s Prof. Feifei Qian is the lead researcher for a $3-million project that could significantly improve robots’ ability to aid with planetary explorations deployed on other planets and the moon. The research group consists of Qian, eight co-investigators from various research universities, including Texas A&M University, University of Pennsylvania, Oregon State University, Georgia Institute of Technology, as well as the NASA Johnson Space Center. Much of the NASA funding supports the students who work on this project.

“This is the dream team and a very rare chance to bring a team with all the components into one project,” Qian said.

Qian joined USC Viterbi as an assistant professor in 2020. She holds a master’s degree in physics and a Ph.D. in electrical and computer engineering from the Georgia Institute of Technology.

“The technology and understanding that this project will develop will also be beneficial for scientific explorations on earth [because] our project will provide understandings of how human scientists make sampling decisions and adapt exploration strategies in response to incoming measurements”, said Qian. With a team of roboticists, earth and planetary scientists, and cognitive scientists working together, the LASSIE team led by Prof. Qian will create the next-generation robots and rovers that can significantly expand our knowledge about the moon and other planets.