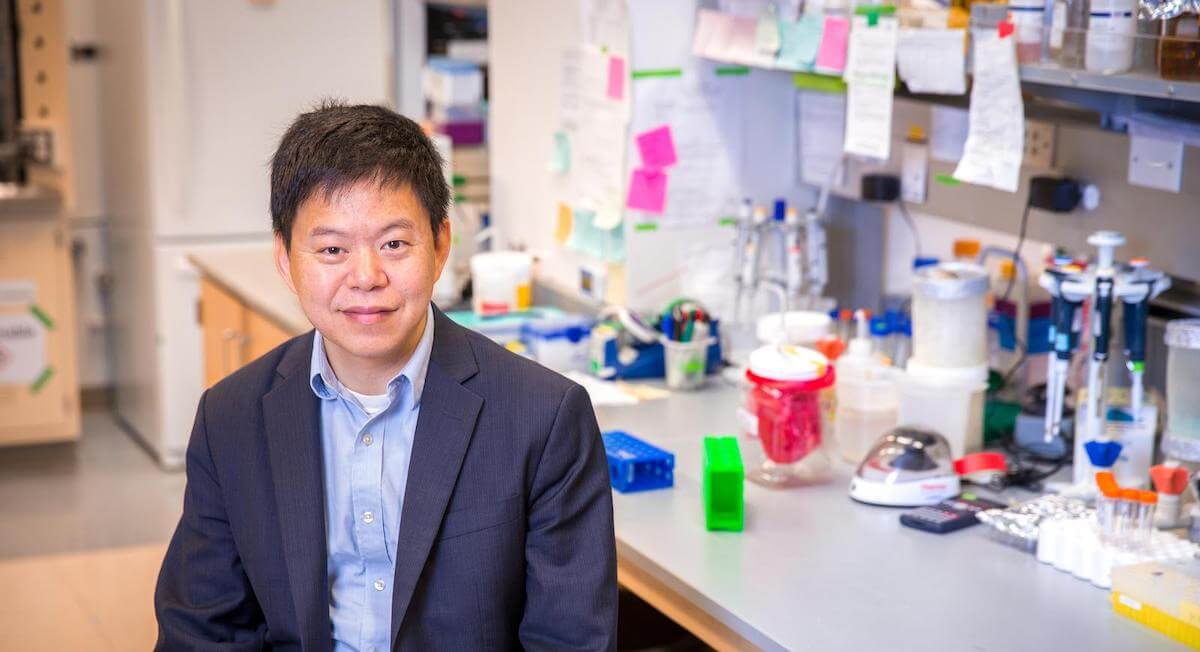 Research leader in the field of precision medicine, Professor Peter Yingxiao Wang, will join the USC Viterbi School of Engineering on January 1, 2023, as the new chair of the Department of Biomedical Engineering.

Wang — who has pioneered work on controllable engineered cells to directly target tumors — will also be jointly appointed at the Keck School of Medicine of USC. He will lead two research laboratories to be housed in the USC Michelson Center for Convergent Bioscience on the UPC campus and the USC Norris Comprehensive Cancer Center on the USC Health Sciences Campus.

Wang comes to USC Viterbi after ten years as a faculty member at the University of California San Diego, where as professor of bioengineering he pursued leading research into cancer immunotherapy and cell imaging. Most recently, Wang and his collaborators developed a breakthrough therapy harnessing focused ultrasound (FUS) to remotely-control specially engineered immune cells, known as FUS-CAR T-cells, to target and destroy solid tumors with high precision in space and time, while avoiding side effects and toxicity on healthy tissue.

“I am thrilled that Peter has decided to join us as the new chair of Biomedical Engineering at USC,” said USC Viterbi Dean Yannis C. Yortsos. “He will lead a remarkable department — the first biomedical engineering department on the West Coast — with a history of landmark accomplishments in this critical field, at the intersection of engineering, medicine and the health sciences. We look forward to his leadership and vision.”

Wang said he was excited to join the department, noting that USC was positioned at a unique advantage, thanks to the depth of research and teaching excellence in both its engineering and medical schools.

“We already have a very strong Department of Biomedical Engineering with multiple rising stars who were recently promoted, combined with the existing strengths from senior faculty, and of course our fabulous students,” Wang said. “We are really strong in both engineering and medicine, and one thing I would like to push is for more intimate and systematic collaboration between USC Viterbi and Keck School, as well as the Children’s Hospital Los Angeles.”

“It’s a really exciting trend for our department’s future, giving us the opportunity to bring our cutting-edge technology directly to patients, where we can really help people.”

Wang said that through increased collaboration, he was eager to break down silos and shorten the pipeline from research and discovery toward patient applications of therapies and technologies. He said he was also interested in ensuring the BME department further expanded its considerable strengths in precision medicine.

“We also have a promising and strong group of junior faculty, like Assistant Professors Cristina Zavaleta on molecular imaging, Jennifer Treweek on quantitative histopathology, and Maral Mousavi on biomedical sensors and diagnosis. Together with other leading professors in the department, like Ted Berger, Gerald Leob, Bartlett Mel and Stan Yamashiro, it will offer more opportunity to collaborate, to sharpen our expertise and to make our ultrasound-controllable CAR-T cell system even more powerful and precise,” Wang said.

Wang obtained his bachelor’s and master’s degrees from Peking University, Beijing in 1992 and 1996, in mechanics and in fluid mechanics, respectively. He moved to California where he received his Ph.D. degree in Bioengineering from the UCSD Jacobs School of Engineering in 2002, before continuing his postdoctoral work there under Bioengineering Professor Shu Chien and Professor Roger Y. Tsien in the Department of Pharmacology.

Before joining the UCSD as faculty in 2012, he was an associate professor at the University of Illinois, Urbana-Champaign (UIUC) Department of Bioengineering, and a full-time faculty member in the Beckman Institute for Advanced Science and Technology at the University of Illinois. He was also affiliated at UIUC with the Department of Molecular and Integrative Physiology, Neuroscience Program, the Center for Biophysics and Computational Biology, and Institute of Genomic Biology.

Wang is a recipient of the competitive Wallace H. Coulter Early Career Award and was also awarded the National Science Foundation CAREER Award, and the National Institutes of Health Independent Scientist Award.

Wang will take over the chair’s role from Interim Department Chairs David Z. D’Argenio, Michael Khoo and Vasilis Marmaralis, who will continue to serve in that capacity until January 2023.