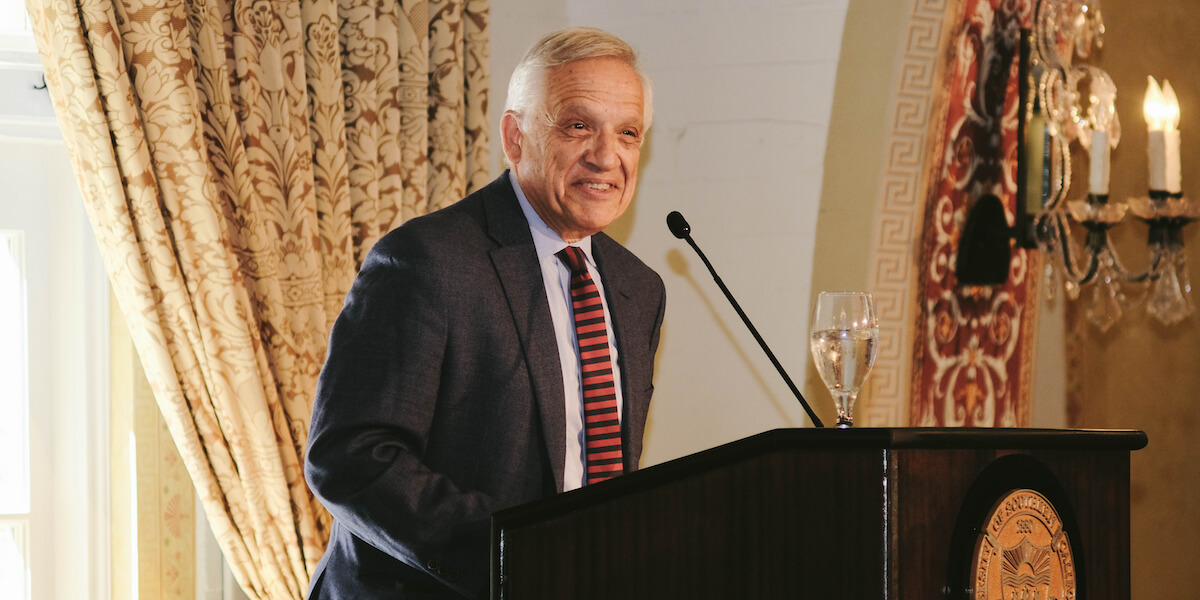 Dean Yannis C. Yortos delivering his speech at the 2022 State of the School (Photo/Keith Wang)

In his 2022 State of the School address , Dean Yannis C. Yortsos discussed the history of the USC Viterbi School of Engineering and its many institutions and programs. In his Sept. 21 remarks, the dean said, “The stronger and more enduring the institution, the more such anniversaries arise. Celebrating longevity with enduring innovativeness is of course the ultimate anniversary.”

Collectively, Yortsos said all these august institutions shared certain characteristics that have allowed them to thrive over the decades: “Bold, uninhibited vision to accomplish something new, exciting, transformative — ahead of [their] time,” he said. “Agility and speed to implement, launch and materialize the vision. Steadfast commitment to the vision, despite obstacles.”

He added: “Strong nourishment, support, trust and confidence by [USC Viterbi] and the nimbleness to leverage new opportunities.”

The following are modified excerpts from Dean Yortsos’ remarks:

On the Grand Challenges Scholars Program

“But in reality,” Yortsos said, “they work on any of the many important questions and challenges in the four buckets I mentioned before: sustainability, health, security and enriching life. And they do so by focusing on five competencies and mindsets: research, multidisciplinary understanding (engineering +), innovation and entrepreneurship, the understanding of human behavior (the cultural mind), and societal consciousness.”

The GCSP impact was recognized last spring by the NAE Gordon Prize – the most prestigious award in engineering education.

“Now, 12 years after inception is sort of 50 years, if we measured time on the basis of 4. (Not exactly dog years but sort of close!) The NAE bestowed this accolade to our school in recognition of creating an innovative education program that prepares students to become future engineering leaders who will address the NAE Grand Challenges of Engineering.”

“At the USC Viterbi centennial in 2005, ISI was 33 years old! Therefore, today, at the golden 50, ISI has been a part of the school’s history for more than one third of its existence. But, notably, because in our exponential era, time does not scale linearly, during the most important thirds, the very recent one. During this period, the growth has been astounding.

In his book of the history of the school, A Remarkable Trajectory, our own George Bekey, acknowledged father of robotics, paints the remarkable ascent of USC engineering in the last 60 years or so. I am here to say that this ascent, full of meaningful transformations (and chemical reactions) would have been impossible without ISI, and its extraordinary accomplishments.

James Gleick provides another brilliant set of insights in his 2012 magnificent book: The Information: A History, A Theory, A Flood. It describes how information, this generally abstract concept, is intrinsic to all sciences and disciplines, intrinsic to our world. Gleick describes how information is represented, how it moves, how it is transformed, how it is quantified, and how it opens a world of concepts and abstractions for our fast-changing world. ISI is the epitome and the nexus of all this – and so much more.

Starting as the institute that helped with the foundations of the internet, its machinery, protocols and empowerment, such as DNS and Voice over Internet Protocol, ISI remains the place where such innovations continue to enrich life and society, whether in the internet’s present version or in an upcoming, decentralized Web 3.0.

In parallel, ISI brings leading expertise in establishing trustworthiness to information in many platforms, including the pervasive social media.”

“Today, we are also celebrating the 50th golden anniversary of another transformative initiative, DEN@Viterbi. What I always described as ‘technology enhanced access to the classroom,’ DEN truly defined the concept of hybrid, long before COVID made it a household term. DEN has made it possible for any student with an internet connection, from American soldiers in Afghanistan and Kuwait to a quadriplegic doctoral student living on the East Coast, to receive a world-class engineering education.

Of course, many universities have remote learning programs, but none has the illustrious history, the across-the-board quality, and the spectacular breadth of DEN, which offers 41 master’s degrees and five graduate certificates. Perhaps that is why for 10 consecutive years, DEN has been ranked in the top five in the nation both for online engineering and computer science.

Like any enduring and prevailing institution, DEN was also the fundamental reason that USC Viterbi established in 2010 the iPodia Alliance, now a global consortium of 17 leading universities. It took a pandemic to realize that the world can be brought together in interesting new ways, including through imaginative platforms such as iPodia, now in strong partnership with Microsoft.”

On the USC Signal and Image Processing Institute

“This year, the USC Signal and Image Processing Institute, or SIPI, also turns 50. Part of our Ming Hsieh Department of Electrical and Computer Engineering, SIPI has left an indelible mark. It is where coding research began for the JPEG and MPEG standards used for digital image compression, enabling, for example, the selfie.

Today, superb SIPI faculty, from Jay Kuo to Shri Narayanan, Krishna Nayak and Maryam Shanechi, are developing groundbreaking technologies, that utilize signal processing techniques in a variety of contexts: Jay received an Emmy for his work on video image processing. And as with the mark of other transformative initiatives, it is undoubtedly the case that SIPI was a fundamental reason for the award by the National Science Foundation to USC of the first ERC in its history, the IMSC. We will hold an event later this year to celebrate SIPI’s golden anniversary.”

On the USC Aviation Safety and Security Program

“On its 70th year, the USC Aviation Safety and Security Program celebrates today its septuagennial, its platinum anniversary. The program, the first of its type at a major university, remains the gold (platinum?) standard of aviation safety management education.  Since 1952, it has taught thousands how to prevent aircraft hazards, crashes, and emergencies. Today, Aviation Safety offers 20 courses to nearly 1,000 students annually in a personalized and hands-on manner. Such students are pilots from major airlines, civil aviation authorities, and accident investigators from countries all over the world, such as Nigeria, Singapore, Denmark, and Mexico.”

On the Dan Epstein Department of Industrial Systems Engineering

“Finally, I would be remiss if I didn’t mention one more anniversary. This year we also celebrate the 20th anniversary of the naming of the Dan Epstein Department of Industrial and Systems Engineering. Dan’s cumulative support of $25 million has allowed his namesake department to grow its faculty towards a steady-state goal of 26; to create endowed chairs; launch a new Master’s in Health Systems Management Engineering, the first degree of its kind in the Western United States; and to build research expertise in emerging fields such as computational systems, machine learning and artificial intelligence. We are immensely thankful to Dan for his faithful and continuous support. And we look forward to moving from porcelain to the silver anniversary five years in the future, with more ‘silver’ in the budget and more ‘gold’ in accomplishments.”

On the Engineering in Society Program

“With all their enabling power, though, powerful technologies also contain the seeds of powerful, unintended consequences. This vast new area is worth further exploring, as it affects fundamental safety and security questions, if not more existential ones. It is this reason, therefore, that we need to help educate engineers not only with outstanding technical competence but also with outstanding character. This combination will lead to trustworthiness, sorely missing in today’s world.

Indeed, our graduates should require more than technical skills. They will need to understand and consider the interests of the communities affected by engineering practice; a strong knowledge of ethical responsibilities; a deep understanding of themselves and their place in society; and the ability to articulate their ideas clearly and compellingly.

That’s why we launched this year the Engineering in Society Program, which revamps the current Engineering Writing Program, by refocusing it on our impact to society. This will help us understand fundamental elements of technology ethics – in a world where technological advances, from AI to CRISPER in genetics, open new worlds of tremendous opportunities, but equally importantly, also opening new questions.”

Dean Yortsos ended his address with a call for USC Viterbi to continue to support a culture of collaboration and excellence.

“So, in a world, where ‘me’ sometimes takes precedence over ‘we,’ let’s continue building a culture that has a positive enduring value, that is lasting and prevailing, in a world where change, therefore, is not the only constant,” he said.

“It is through such mindsets of growth, respect and inclusiveness, that we will empower all disciplines, create new transformative initiatives, the next ISI, the next DEN, the next SIPI, the next GCSP and in the process continue to engineer a better world for all humanity,” Yortsos added.