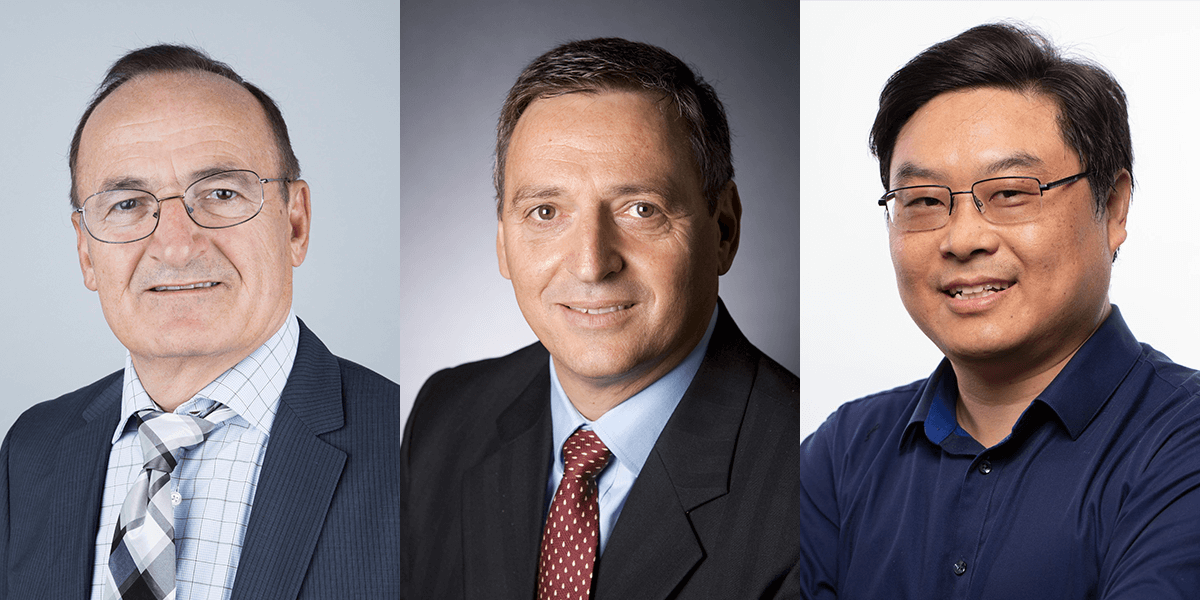 Petros A. Ioannou and J. Joshua Yang, professors at the USC Viterbi School of Engineering, and Gérard Medioni, a USC Viterbi emeritus professor, have been elected as National Academy of Inventors (NAI) Fellows, the highest professional distinction accorded solely to academic inventors. They join a distinguished class of 169 new inductees and bring USC’s overall total to 24.

The NAI Fellows Program, established in 2010, spotlights academic inventors who have “demonstrated a prolific spirit of innovation in creating or facilitating outstanding inventions that have made a tangible impact on quality of life, economic development and the welfare of society,” according to the NAI.

Collectively, fellows hold about 53,000 issued U.S. patents, which have generated over 13,000 licensed technologies, 3,200 companies and created more than one million jobs. In addition, over $3 trillion in revenue has been generated based on NAI Fellow discoveries.

As a reflection of their excellence, 165 NAI Fellows serve as presidents and senior leaders of research universities, governmental and non-profit research institutes; over 640 are members of the National Academies of Science, Engineering and Medicine; and dozens are Nobel Laureates, the NAI said.

He received his B.S. degree with first class honors from University College, London in 1978. He then went on to M.S. and Ph.D. degrees from the University of Illinois, Urbana-Champaign in 1980 and 1982, respectively. He joined USC Viterbi’s Department of Electrical and Computer Engineering in 1982, and this year marks his fourth decade as a member of the faculty.

He is also the author or co-author of nine books and over 400 research publications in the area of controls, vehicle dynamics, neural networks, nonlinear dynamical systems and intelligent transportation systems. He has served as a technical consultant to several automotive, aerospace and computer/electronics companies and as an expert witness on automotive control and sensor systems and safety.

Gérard Medioni
A professor emeritus of computer science and Amazon VP and distinguished scientist, Gérard Medioni’s research interests encompass a broad spectrum of topics in computer vision and machine learning. His 40-year career includes roles in academia, startups and industry. He earned his Ph.D. from USC in 1983 and served as chair of the Department of Computer Science from 2001 to 2007.

A prolific inventor, Medioni holds more than 54 patents. His many innovations include a low-cost imaging technique that transforms a silhouette into a 3D body model; a camera that provides both image and depth information, which is now integrated into the Apple iPhone; Amazon’s Just Walk Out, a check-out free shopping experience that allows shoppers to enter a store, grab what they want, and get billed when they leave; and Amazon One, a payment system based on biometrics that works by reading users’ palm prints.

“I am delighted and honored to be elected as a fellow of the National Academy of Inventors, joining several of my USC colleagues,” said Medioni.

J. Joshua Yang
A professor of electrical and computer engineering, Yang’s research interest is in post-CMOS hardware for in-memory computing, near-sensor computing, neuromorphic computing, machine learning and artificial intelligence. He is the founding chair of the IEEE Neuromorphic Computing Technical Committee, a recipient of the Powell Faculty Research Award, University of Massachusetts distinguished faculty lecturer and the recipient of a UMass Chancellor Medal, the highest honor at that university. Yang was also previously elected an IEEE Fellow for contributions in resistive switching materials and devices for memory and neuromorphic computing.

Yang holds 118 granted and about 60 pending U.S. patents, among which, two patents on MRAM were licensed by a world leading semiconductor company. He is also a co-founder and the chairman of the scientific advisory board of TetraMem Inc., a startup company focusing on the hardware acceleration of AI/ML.

As one of the directors of the newly established Institute for the Future of Computing at USC, Yang aims to investigate novel and emerging computing paradigms, architectures and physical fabrics that can significantly improve functionality, security and sustainability of today’s computing systems. The institute’s approach is mission and application driven, including applications in information processing, bioinformatics, medicine and artificial intelligence. Emphasis is also placed on investigating the impacts of these technologies on the environment, people and society as a whole.