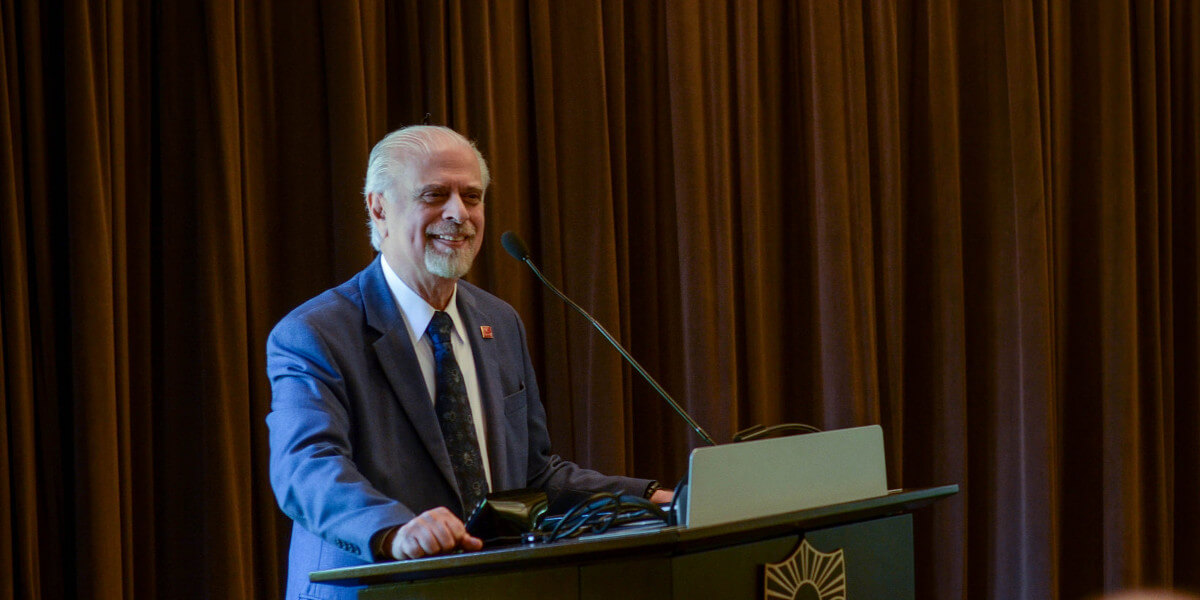 For the second year in a row, a faculty member from the USC Viterbi School of Engineering was awarded the National Academy of Engineering’s (NAE) Bernard M. Gordon Prize for Innovation in Engineering and Technology Education.

This year, the recipient of this prestigious honor, which recognizes the introduction and cultivation of “new modalities and experiments in education that develop effective engineering leaders,” is Azad M. Madni, a systems engineering pioneer, holder of the Northrop Grumman Foundation Fred O’Green Chair in Engineering and University Professor of Astronautical Engineering.

Madni, who was also elected to the NAE in 2021 is recognized for his work that the NAE said, “defined the field of transdisciplinary systems engineering and created the transdisciplinary systems engineering education (TRASEE™) which fosters out-of-the-box thinking while enhancing retention and recall of concepts and facts through innovative storytelling and role-playing approaches.” Through TRASEE, said the NAE, Madni “transformed USC’s Systems Architecting and Engineering Program by incorporating content from complementary disciplines in the curriculum” and also redefined the teaching approach by “combining storytelling with pedagogical principles from the learning sciences.”

Yannis C. Yortsos, dean of the USC Viterbi School of Engineering, said: “We are thrilled that our distinguished colleague Azad Madni received the 2023 NAE Gordon Prize. Azad has pioneered systems engineering as a fundamentally transdisciplinary field encompassing socio-technical and human-centric aspects. His recognition by the National Academy is fitting, well-deserved and exhilarating. It underscores the strong legacy at USC Viterbi  from its early roots in systems architecting pioneered by Eb Rechtin to today’s ground-breaking work in transdisciplinary systems engineering. We are equally thrilled to have the NAE Gordon Prize awarded for two consecutive years to USC Viterbi faculty, reflecting the outstanding work done at USC in engineering education innovation.”

Madni described why he believed engineering education needed to evolve. He said educational programs needed to move away from “stove-piped curricula” or what he calls “disconnected islands of concepts and facts.” He explained that the field of transdisciplinary systems engineering (TSE) he founded, “exploits the convergence of engineering with other disciplines to address complex, socio-technical problems that cannot fully be addressed by engineering alone.”  This means integrating concepts from disciplines such as cognitive psychology, biology, economics and decision-analysis into engineering coursework. In addition, he leverages “principles of storytelling” from entertainment and the arts, and role-playing from simulations and gaming environments to enable students appreciate the nuances and understand the different perspectives of problems.

Madni, whose research is in the fields of aerospace and defense, wanted to make sure that leaders had the requisite competencies to “make decisions without complete information, understand human cognitive limitations and biases and work to overcome the biases.” And as much as he wants students to become engineers who embrace change, he is urging engineering educators to do the same.

Madni, is a fellow or life fellow of 10 professional science and engineering societies, including AIAA, AAAS,  IEEE, INCOSE, IISE and the Washington Academy of Sciences. He has received several prestigious awards and honors from the U.S. government, the aerospace industry, professional societies and commercial organizations.  Just recently, he was also awarded the 2023 IEEE Simon Ramo Medal for exceptional achievements in systems engineering and systems science.

Madni’s Gordon Prize will be celebrated at USC in May 2023.