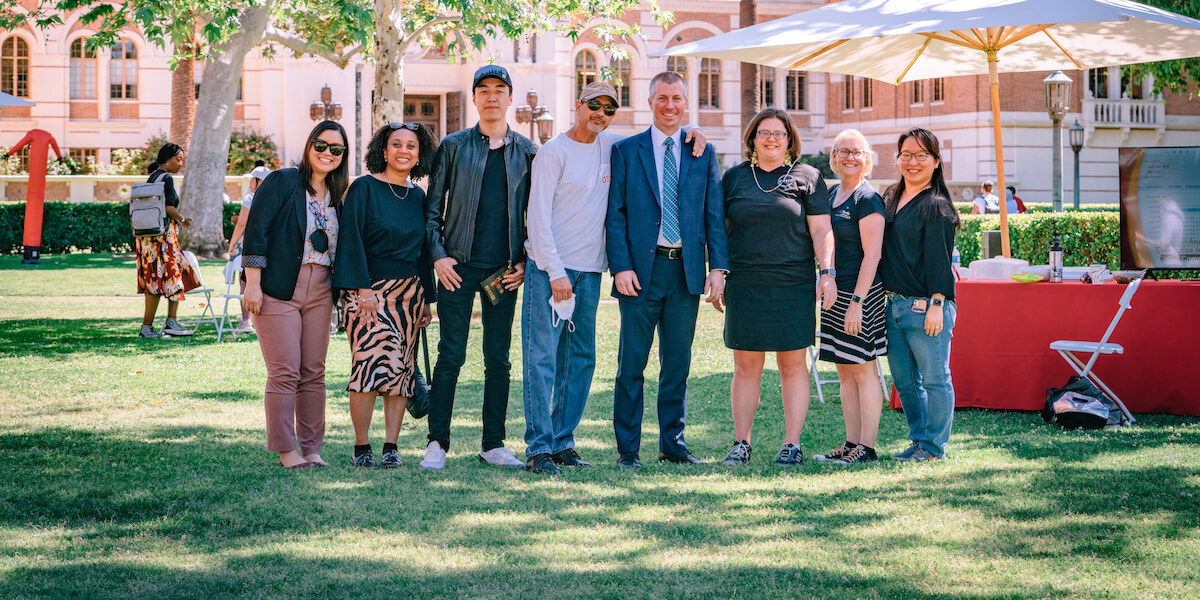 For the past four decades, the USC Viterbi School of Engineering’s Information Technology Program (ITP) has offered students practical, hands-on experience with the latest programming languages and tools; insights into technology’s increasing impact; and improved problem-solving skills. Thousands of Trojans have taken courses in computer programming, data science and other subjects since the program’s inception. In the process, they have acquired skills that have better prepared them for an increasingly high-tech world.

Over the years, ITP has grown in popularity and stature to such an extent that the program now boasts USC’s most popular minor, applied analytics. It educates about 4,000 unique students annually, or nearly 20% of the undergraduate population at USC.

To celebrate the program’s 40th anniversary, ITP threw a party for itself on Tuesday, March 22 and Wednesday, March 23 at Alumni Park. Students congregated for lunch and conversation and to learn about ITP, which, Miller said, is stronger than ever. About 1,000 students from departments around the university came out to celebrate, with many interested in declaring ITP minors. Ten years ago, ITP offered 35 classes; today it has 93. Similarly, a decade ago, the program featured five minors, while it now offers 15, including applied computer security, mobile app development and blockchain. This fall, artificial intelligence applications, and law and technology will become the 16th and 17th minors.

Eighty-six percent of students in ITP come from outside USC Viterbi.

“ITP is completely composed of teaching faculty, so we’re not driven based on research dollars, but based on the interest of the faculty and what we see changing in industry,” Miller said. “We’re also very practical and not theoretical, like most departments at the university are.”

Like many current and former ITP students, Hannah Chong said she benefited greatly from the program’s emphasis on real-world, hands-on learning. A 2020 public relations graduate from the USC Annenberg School for Communication and Journalism, Chong minored in computer programming, taking five ITP classes. She credits ITP with helping her land a full-time position at IBM as a technical support member of the sales team.

The job positing specified that IBM preferred someone with an engineering degree. However, Chong successfully argued that because of her computer programming background, she understands technology and could easily pick it up. “I don’t think I’d have this job without ITP,” she said. Similarly, Jennah Motani, a USC Marshall School of Business major minoring in applied analytics, said she believes her ability to understand and leverage massive amounts of data will make her a far more attractive candidate to prospective employers.

“Analytics is a skill that you can apply to many [fields], and it’s a good skill to have under your belt, especially in business,” Motani said. “I think the ability to analyze data is critical and is really where the future is going.”

ITP’s applied analytics has become USC’s most popular minor only five years after its creation. About 550 students now minor in it, with cinema coming in second, and business finance placing third.

Miller, the ITP director, joined the university in 2013 after six years as tenured computer science faculty at the University of Alaska Anchorage. He assumed the ITP top spot in 2019.

Throughout, Miller said his overriding goal has been to excite and educate as many Trojans about technology and its myriad applications and possibilities. “I came in and I inherited an amazing program in ITP, and we’ve continued to make it better,” he said.