Each spring, female computer science students eagerly wait to learn if they’ve been selected to receive a scholarship to attend the Grace Hopper Celebration (GHC). The participants come from different backgrounds and life experiences, but they all share key things in common: a love for tech and a goal to be the next leaders in the industry.

This year, the department sponsored 54 USC students to attend the event in person and virtually, which took place Sept. 20-23 in Orlando, Florida. The celebration honors computing trailblazer Admiral Grace Hopper, who helped pave the way for young women in science, technology, engineering and math (STEM) and carves out time for women and non-binary individuals to network and, most importantly, empower themselves and others.

Since 2009, Claire Bono, a senior lecturer in computer science, has led the scholarship program, which allows selected computer science students to attend the annual conference at no cost. “For the women attending, I hope that seeing people who look like them in leadership positions and in great numbers, inspires them and boosts their confidence,” said Bono.

The inaugural Grace Hopper Celebration was hosted in 1994 by nonprofit AnitaB.org creators, Dr. Anita Borg and Dr. Telle Whitney. Today, the unique panels, research, and networking opportunities allow attendees to explore and cultivate all facets of their professional aspirations.

Maia Cho, a computer science junior, met her inspiration, Professor Ruha Benjamin, author and founder of the Ida B. Wells Just Data Lab. The pair discussed their backgrounds and connections to the Chicago Freedom School, where Cho found her passion for computer science while working as a community organizer.

Cho also appreciated an often-overlooked element at conferences: time to speak with her peers. “We had so much time to talk about issues in the tech world, the struggles we’ve gone through,” said Cho. “It was more than just the class setting; getting that bond was a huge takeaway.”

Yashvi Jaju, a computer science and business administration junior who has always felt empowered by software engineering, attended the celebration to immerse herself in a female-driven environment.

“Being a woman is not going to be a restriction anymore, we are past that.” Yashvi Jaju

After working for companies big and small, Jaju has seen firsthand the lack of women working in tech. “I’ve been the only woman in multiple teams,” said Jaju of her professional experience.

“I’m an international student from India. I’m a woman. I hadn’t met too many people who look like me, talk like me, so I thought the Grace Hopper Conference would be a good way to see that this is possible,” said Jaju. “Being a woman is not going to be a restriction anymore, we are past that.”

For Natalie Humber, a computer science junior with a love for med-tech, it was the Grace Hopper career fair that had her most excited. She interviewed with multiple companies including Bank of America, Eli Lilly and Analog Digital, and through the Grace Hopper recruiting process, received a job offer from Apple. Through the celebration, the AnitaB.org foundation aims to achieve equal representation in tech by 2025. Maia Cho believes that there is value in defining this goal and by doing so, women in tech get closer to achieving it.

“This is a movement to get underrepresented people into tech,” said Cho. “There’s so much hope and there’s so much positive impact from justifying this goal and striving toward it. AnitaB saying, ‘We are making this change now and we are making it together,’ is so important.”

Those who attended felt awe and appreciation for the number of women gathered in a shared space working toward equity.

“Grace Hopper was super powerful because it was a moment of acknowledging that we’re all here for each other, we all understand what each other have gone through,” said Humber. “I hope the guys who were there observed how we felt and how they felt and take that with them moving forward.”

The Grace Hopper Celebration continues to be important for young adults today because it provides a space for all women and non-binary individuals to feel heard and seen in tech.

For Jaju, it was encouraging to see and meet people who are also women in the same industry, “It’s a very male-dominated field, so it’s rare to see women,” said Jaju “It can sometimes feel almost like imposter syndrome, like ‘do I really belong?’ Gender should not be the reason you decide not to pursue something. It was wonderful to be able to meet so many people who also thought the same and were there to uplift one another.”

Cho, who is also a tutor with the Viterbi Learning Program, feels that Imposter Syndrome is unavoidable and as a tutor, she sees this with female students.

“So much of the issue is confidence,” said Cho. “Female students know what they are doing, but feel that this isn’t their space.”

Humber observes that for female students, “it’s not a lack of interest; the problem comes with the dropout rate. What female students need are resources and role models.”

Admiral Hopper once said, “Manage things, lead people” and that’s exactly what the organizers of her celebration hope to instill in the female tech leaders of the future.

“The conference was very inspiring, to come from such different backgrounds and such different experiences, but the end goal for everyone is, we are women, let’s lift each other up,” said Jaju. “We are the future, we are next, and we are doing it now.” 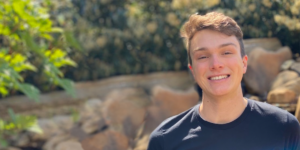