Herbert Schorr has announced plans to leave the top leadership position at the USC Viterbi School’s Information Sciences Institute (ISI) that he has held since 1988. 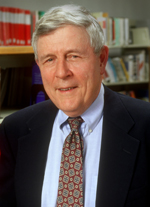 “We mark time periods by the remarkable events that occur within it. They are a measure of change,” commented Viterbi School Dean Yannis C. Yortsos following Schorr’s annoucement, made at a recent institute off-site retreat. “The period since 1988 will certainly be characterized at USC by the brilliant career of a man, Dr. Herb Schorr, who brought a huge positive change by being at the helm of the Information Sciences Institute, to the good fortune of USC and the Viterbi School.”

“During the search,” said Yortsos, “I will be advised by USC Trustee and CEO of Northrop Grumman Emeritus Ron Sugar as well as by Herb. A search firm to be selected shortly will assist in the search. The engagement of our community in identifying strong candidates to lead ISI in its new phase is strongly encouraged.”

“I am looking forward for the Institute to not only not miss a step, but to grow and flourish, during this period. The support of the Dean’s office for ISI will remain as strong or stronger during the period of the search and following the appointment of the new Director.  I anticipate that following the appointment of his successor, Herb will continue being associated with USC and the Viterbi School in a key advisory capacity.” Schorr is currently a vice dean of the Viterbi School. He has graciously accepted to remain in his position to lead the Institute until the successful culmination of the search.

Prior to USC, Schorr had a long and distinguished career at IBM. He joined IBM as a Research Staff Member at Yorktown in 1965. In 1966 he became Manager of Systems Architecture and Programming for the Advanced Computing System project in Menlo Park, California and later served on the Corporate Technical Committee in Armonk.

In October 1984 he was named Group Director, Products and Technology, IS&SG and in 1987 he became Group Director, Advanced Systems, Information Storage and Systems Group, responsible for the introduction of new, advanced technology. In particular, he was Artificial Intelligence and Image Champions for the IBM Corporation and managed Project Offices in both areas with the responsibility for Products, Marketing and Internal Applications of these technologies.

Herbert Schorr received his Ph.D. in Electrical Engineering from Princeton in 1963. He was an Instructor of Electrical Engineering at Princeton during the 1961 academic year. During 1962-63 he was a National Science Foundation Postdoctoral Fellow at Cambridge University, England. Upon returning from England, Schorr became an Assistant Professor at Columbia University for the year prior to joining IBM.

Schorr is a member of the Institute of Electrical and Electronics Engineers, the Association for Computing Machinery and the American Association for Artificial Intelligence.