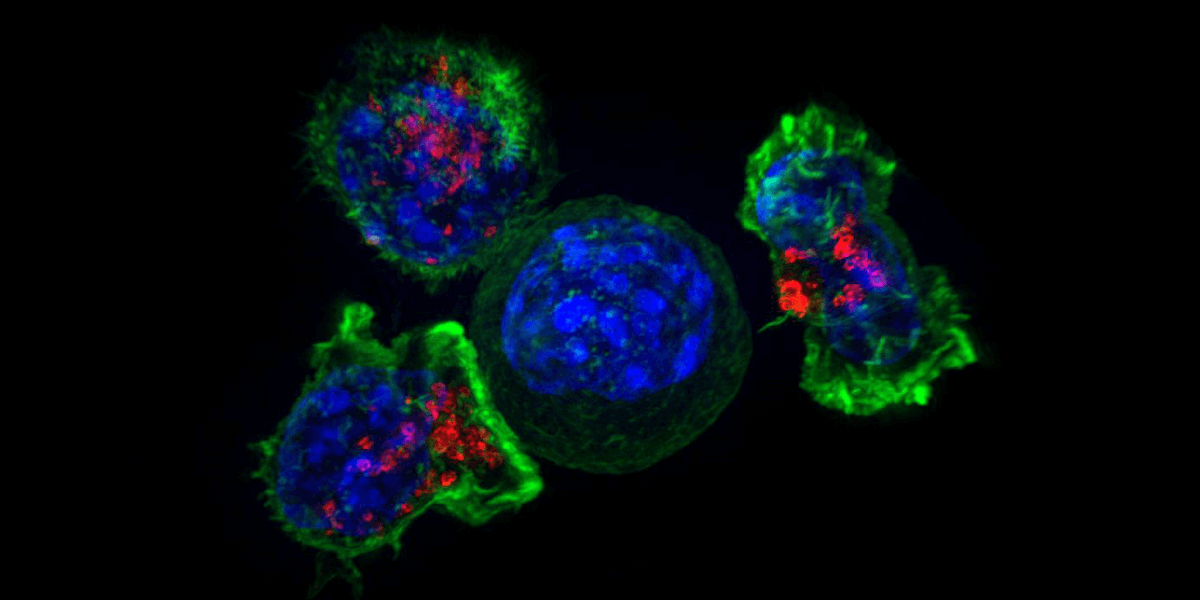 Cancer is the second leading cause of death in the United States. But in recent years, a revolutionary therapy has brought new hope in the fight against the disease that takes the lives of nearly 600,000 Americans each year. Chimeric Antigen Receptor (CAR) T-cell therapy is a highly customized treatment in which cancer-fighting T-cells are drawn directly from the blood of a patient and given genetic modifications to enhance their ability to target and kill cancerous cells.

The treatment works best in blood-borne cancers such as leukemia. Until now, it has not been as effective when applied to solid tumors, such as breast cancer and melanoma—which make up more than 80% of cancers.

A team of research students in the USC Viterbi School of Engineering Mork Family Department of Chemical Engineering and Materials Science has discovered how to build on CAR T-cell therapy to also stimulate production of an enzyme that can boost T-cells’ ability to attack and destroy solid cancers.

The work, led by Ph.D. students Zachary Dunn and Yun Qu has been published in the journal Human Gene Therapy.

“Engineering CAR T-cells for solid tumors is an area of active research where there just hasn’t been a breakthrough yet,” Dunn said. “There are signs of promise that CAR T-cells might be able to combat solid tumors and we wanted to tackle this problem in a new way.”

In CAR T-cell therapy, blood is drawn from a patient and manipulated so the T-cells—the cells that are key to human immune response in fighting pathogens— are given a special gene called a CAR—or a chimeric antigen receptor—which is designed to bind to a protein on a cancer cell. The USC Viterbi research team is using an engineered version of a human virus to insert the cancer-killing CAR gene into the T-cell.

Dunn said that a major advantage of CAR T-cell therapy is that it’s often less debilitating for a patient than other cancer treatments, because the engineered receptors on the therapeutic cells specifically target the extracellular markers on cancer cells, rather than targeting healthy cells.

“The CAR really allows a T-cell to hone in on the cancer cells and then also have the necessary activation and stimulation to elicit its cancer killing ability. It’s been shown that CAR T-cells have the potential to persist longer in the body, so they’re able to keep the cancer at bay.” Dunn said. “Chemotherapy and radiation target any rapidly-dividing cell—which will harm cancer cells, as well as a number of other types of cells in the body.”

Despite these advantages, the treatment shows much lower effectiveness in solid tumors, because solid cancers create a microenvironment where immunosuppressive substances such as adenosine accumulate. Adenosine prevents CAR T-cell therapy from being able to mount an effective immune response against the cancer cells.

It’s here where the USC Viterbi team unleashed their secret weapon to combat this immune-suppressing environment in tumors: the enzyme adenosine deaminase—or ADA. Dunn and his colleagues discovered that by engineering their CAR T-cells to also release an increased amount of the ADA enzyme, the tumor’s immunosuppressive microenvironment is broken down, allowing the cancer-killing cells to better penetrate the cancer.

“Adenosine deaminase degrades adenosine into inosine—thus inactivating its ability to block CAR-T cell therapy. We predicted that by reducing the amount of adenosine, or strengthening the T-cells’ resistance to adenosine, that it would enhance the solid tumor efficacy of CAR T-cells,” Dunn said.

In the lab, the team saw promising results when they engineered their CAR T-cells to also secrete the ADA enzyme, discovering this effectively reduced T-cell exhaustion—helping the cells maintain their cancer-killing abilities.

Dunn said the team then moved onto in vivo experiments where they studied the growth of human cancer cells within immunocompromised mice.

“We administered our CAR T-cells as a therapeutic agent, and we were able to see based on tumor growth, that the over-expression of ADA enhanced the CAR T-cells’ ability to control the tumor,” Dunn said.

This meant that the cancer-killing cells were able to infiltrate solid tumors much better than before, while also keeping the tumors in check over time.

“We did see that there was increased infiltration of the ADA-over-expressing CAR T-cells. We also saw that throughout different organs in the mice, that ADA-over-expression enhanced the persistence of the T-cells in their bodies,” Dunn said.

The team now is continuing their pre-clinical research to better target the CAR T-cells to attack different types of cancers.

Dunn said that one of the hallmarks of cancer is that it has genomic instability, so that by blocking a cancer’s immune suppressive pathway with one treatment, the cancer may be able to adapt and suppress this immunity via another pathway. To combat this, the team is looking at a CAR T-cell approach that may be able to block multiple pathways at the same time, reducing the cancer’s ability to find other ways to suppress immunity.

“It would definitely be exciting to push the field forward as far as targeting solid tumors with CAR T-cells,” Dunn said.

The research was supported by grants from the National Institutes of Health and the Ming Hsieh Institute.