Since 2014, a collaboration between USC Viterbi and India-based early stage investor Axilor Ventures has aimed to inspire innovators and entrepreneurs in India. One such startup the two organizations have in common is Urban Piper, an Indian startup run by USC alumnus Saurabh Gupta that was funded by Axilor.

The idea for this collaborative lecture series between USC Viterbi and Axilor has been to cultivate blue-sky ideas, and to connect thinkers and doers in the fast-growing tech economy in India. For USC Viterbi, it is also a chance to support alumni who have returned to India and further extend the Trojan family.

“We try to support and inspire deep-tech innovators to build a global community of engineers who contribute to solving global challenges,” said Viterbi Dean Yannis C. Yortsos, who is also the Principal Investigator and lead for the National Science Foundation’s I-Corps Hub: West Region, to cultivate deep-tech startups across the Western United States.

Axilor, which was founded by tech-industry veterans and co-founders of Infosys, has worked with USC to put on this annual series.  This past week, USC Viterbi alumni Anita Sengupta, Associate Professor of Astronautical Engineering at USC Viterbi and Founder and CEO of Hydroplane Ltd., and Manoj Gopalkrishnan, now on the IIT faculty, and founder of Algorithmic Biologics, spoke about their startups.

In the first presentation, titled “Future of Transportation,” Sengupta focused on this question: “How do we reinvent transportation?”

Sengupta, who was instrumental in developing the landing system for landing the Mars Science Laboratory Curiosity Rover while at NASA’s Jet Propulsion Lab, has always been interested in transportation, including in the design of a hyperloop. An accomplished pilot, she has turned her interest to developing sustainable aviation. Her startup, Hydroplane, which has residency at USC Viterbi’s Startup Garage, aims to enable emission-free air-travel, based on hydrogen fuel cell technology. In its first effort, Hydroplane  is working to power single engine aircraft and vertical takeoff and landing aerial platforms.

Computer Science alumnus Manoj Gopalkrishnan, founder and CEO of Algorithmic Biologics and an Associate Professor at IIT was the other keynote speaker.   At USC, Gopalkrishnan studied DNA computing with Turing Award winner Len Adleman.  He compares algorithmic biology, “where we try to imagine how the cell thinks” and “where we are engineering molecular systems inspired by the cell,” to the early development of the automobile. An XPRIZE finalist, he says that his company, currently focused on COVID testing, will, in the future, focus not on synthetic biology but on the understanding and leveraging of biochemical networks which he compares to building systems with increasing number of circuits.

Gopalkrishnan believes we are at a unique point in human history– applying knowledge of computing to create “computational primitives in chemistry” –which sounds a little bit like computational chemistry Legos.

“Life is matter plus algorithms,” he says.

Gopalkrishnan believes that we are at stage similar to 1985 when the power of computing was unleashed.  According to him, molecular testing will play an increasingly important role, and with the help of algorithms will enter a broadband era of higher, speed, bandwidth, and accuracy of testing. His work builds on the legacy of individuals like Andrew Viterbi who took communications to the next level.

Other applications for Algorithmic Biologics will be food testing and agricultural R&D eventually being used for identifying the best seeds to cultivate that will withstand climate change and pest damage.

One exciting announcement made during the symposium was seed funding for Algorithmic Biologics.

“Creating and curating ventures requires innate talent to come up with an idea, creativity to demonstrate product-market-fit, and operating skill to scale the effort.  Throughout, we need capital. At Axilor Labs, all of these ingredients come together to bring cutting-edge scientific ideas into India’s mainstream,” said Tarun Khanna, co-founder of Axilor and a Harvard Business School Professor.  “Our investment in Algorithmic exemplifies this approach. Together with Manoj, we are helping prove the business impact of this breakthrough technology. ”

Axilor spokesperson Nidhi Mathur, added, “At Axilor Labs, we are investing in transformative technologies from India that will take us towards a healthier and sustainable world…We will be excited to hear from USC alumni in India who are building deep tech-based solutions capable of causing impact on human health at a global scale.”

The lecture series is available to watch here:  https://www.youtube.com/watch?v=Vnhd7q39Tn0&t=43s What Happens To All Those COVID Test Nasal Swabs? That’s Where It Gets Complicated. 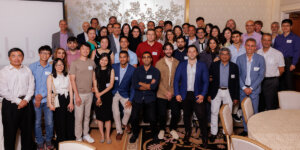