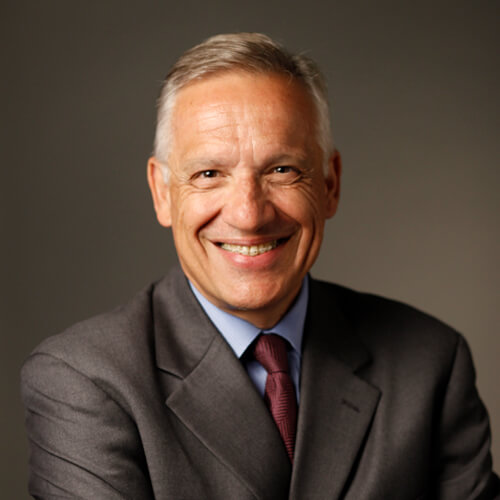 Dean Yortsos on the National Academy of Engineering Grand Challenges

On February 6, 2013, Dean Yannis C. Yortsos delivered the keynote speech at the annual meeting of the National Academy of Engineering (NAE) at the Beckman Center in Irvine, CA. The speech (download .pdf file of the speech here) addressed the NAE's Grand Challenges and gave tribute to Chuck Vest's leadership during his tenure as NAE president. See excerpts of that speech below.

On outgoing NAE president Chuck Vest:
"I am honored to . . . pay homage to the best engineering leader, at least I have met, Chuck Vest. With the end of his term as NAE President, we will miss Chuck and his vision. About two years ago at the USC Global Summit on the NAE Grand Challenges, I introduced Chuck to the middle- and high-school kids who attended the meeting. Not being able to come up with a better analogue I said to them 'think of Chuck Vest as the Kobe Bryant of engineering' (parenthesis: Kobe was an even greater player two years ago). That did resonate well with them. I think that Chuck also liked the analogy, although he told me later that the closest he has come to basketball royalty was as undergraduates in West Virginia, where both he and another NBA legend, Jerry West, attended."

Variation allows new, different and diverse ideas to spawn and be contemplated; selection allows the rigorous testing and criticism of all the various alternatives, with finally bestowing to the best idea, that which passes the most critical tests, the identity of the new knowledge.

On engineering enabling the social sciences:
"Now, I have been thinking a bit about the Grand Challenges and have realized that perhaps there is a fifth bucket missing . . . Humans are social animals, and that component is missing from the GCs. In a map of the research endeavors of engineering faculty at USC (which I call Engineering+), the overlap we found was not restricted to Natural Sciences (Sustainability, Security), or Medicine (Health), but also expanded to Arts and the Social Sciences. It is my suggestion that GCs in that area are also needed, including in engendering economic growth and innovation- in fact, there is nascent movement to articulate them."

A National Conversation on the Grand Challenges:
"A step in the changing of the conversation was taken in 2009 at the first national summit, put together by Duke University, Olin College and USC.

The first summit in March 2009 resulted in the creation of the GC scholars program, which spread to more than 25 schools in the US- and it is now growing globally. It was followed by regional meetings hosted at U. Washington, NC State, Olin, Chicago and Phoenix. These were culminated by a second national Summit in Los Angeles in October 2010, cohosted by USC and Caltech. All these meetings were spontaneously organized by the respective schools, but they were strongly supported by the NAE and Chuck. At the end of the first Summit I expressed our aspiration for the event to become the “Davos of Engineering”. Through Chuck’s and NAE’s efforts, this is indeed now happening: As many of you know, there will be a global summit, hosted by the RAE, and co-sponsored by the NAE and the CAE in London in March 2013. Leaders from the three societies just published a letter in the London Times to position the Global Summit as a much more meaningful alternative to the typical Davos meeting."

On Changing of the Conversation:
"For engineering to empower society, society must empower engineering: In a complimentary and symmetric way. This means that we need to attract, nourish and grow the talent, in all its diverse forms, and in the right environment to propel engineering to solve challenges and open new frontiers. I found parallels of this in the “Beginning of Infinity”. Deutsch seeks to explain how knowledge evolves. His answer is interesting and enlightening: Just like Darwin’s biological principles, it requires two overarching processes: variation and selection.

Variation allows new, different and diverse ideas to spawn and be contemplated; selection allows the rigorous testing and criticism of all the various alternatives, with finally bestowing to the best idea, that which passes the most critical tests, the identity of the new knowledge. Which is new, that is, until another novel idea appears which displaces the previous and becomes the new knowledge. And in our times, this happens with exponentially increasing speed.

From this simple but profound explanation draws a powerful conclusion: For new knowledge to be created the environment must be built that nourishes on the one hand this spirit, of free, diverse and unencumbered exploration and research (Variation); and on the other the free, diverse and unencumbered criticism and testing (Selection). It is only through this combination that we will enable the creation of new knowledge to flourish, and the GCs to be advanced."

On technology:
"Technology is the exploitation of a phenomenon for useful purposes. I would characterize 'exploiting' as 'controlling, adapting, transforming, manipulating,' or other such actions. Technology is also used to uncover the phenomenon itself (science and technology go hand-in-hand for this purpose); in fact, 'advancing the tools for scientific discovery' is one of the NAE 14 Grand Challenges. Sensing and recording, computation, communication and control are essential in both the uncovering of the phenomenon and the building of the technology itself. I should note that in the above, 'useful' is in a general 'public good' sense, although 'useful' is in the eye of the possessor, the developer, or the consumer of the technology. And what is useful to some may not be to others. Now, in the past, and traditionally, the 'phenomenon' was physical or chemical, e.g. photoelectric effect, semiconductors, combustion, with the resulting technology being what is traditionally associated with engineering (sensors, actuators, computers, airplanes, etc.).

During the last few decades, however, the rapid (exponential) advances in biology brought us 'biotechnology' and 'bioengineering,' with unprecedented consequences for health and medicine, as well as for biomimicry in designing new materials and processes. This has brought ever closer, biology, engineering and medicine (the convergence we witness today).

I will argue . . . that we are also witnessing now, and at an unprecedented fast pace, a new technology (sociotechnology), based on the exploitation of social (rather than physical, chemical or biological) phenomena. Social media technologies (from Facebook to Twitter, etc.) are characteristic of these."

On the NAE Grand Challenges:
"In a study commissioned by the National Science Foundation, the NAE was tasked to identify the new Grand Challenges for Engineering, a task which was completed in 2008. The Grand Challenges set a grander scope for a discipline - they help providing a map, they inspire, and they serve to justify and give accountability. The NAE GCs are also a call to politicians, lawmakers and global leaders - to focus on what is really important. They cover all spatial scales: from the atomic (and quantum) to the planetary . . .

"All reflect the human aspiration to strive for a better, always better future. In their enduring aspect, I am reminded of the book 'The Beginning of Infinity,' by Oxford quantum physicist David Deutsch. He states:

Problems (I prefer to say, challenges) are inevitable.
But all problems are soluble. (As a chemical engineer I was fascinated that the word Deutsch used is not the more conventional “solvable”, but “soluble”, which essentially means dissolved, disappear, dissipate.) So, consistent with their enduring nature, our Grand Challenges (and others to come) are inevitable- they are the collisions of ideas and choices. But, and here comes Deutsch’s optimism, which I share wholeheartedly, they are all soluble- through science and engineering and technology (and through interdisciplinary engagement)."

Engineering Stay With It

The President’s Council on Jobs and Competitiveness in 2011 created the “Stay With It” campaign, focused on engineering students. The campaign launched in 2012. Click Here For More Info

Reports and proceedings that add to the growing body of knowledge on engineering and technology practice and policy. Click Here for More Info

Online “toolkit” containing messaging-related resources, community-building applications, and other resources to support the goal of promoting broader use of new messages for improving the public understanding of engineering. Click Here For More Info