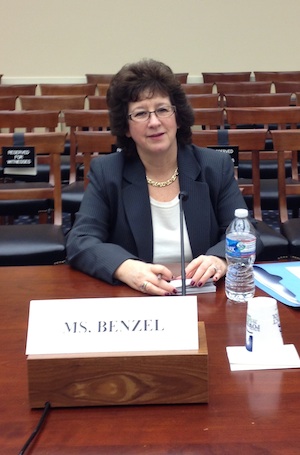 Terry Benzel, deputy director for the Computer Networks Division at USC’s Information Sciences Institute, testified February 26, 2013 before members of Congress about the need to be on the winning side of the cybersecurity battle.

“While cyber-threat growth continues to accelerate, the stream of new and effective cyber-defense technologies has grown much more slowly,” Benzel told the House Science, Space, and Technology Committee.

The act is important because it would continue to make cybersecurity research and development a priority and ensure that there is funding, said Benzel. Securing cyberspace is one of the NAE Grand Challenges.

In her testimony, Benzel made four recommendations on how to improve the range of cybersecurity research. First, she encouraged interdisciplinary research to capture the complexities of cybersecurity challenges.

Now, cybersecurity research all too often focuses on just one issue at a time, such as computer viruses or worms. However, there are problems with this narrow approach.

“The ‘bad guys’ are not focusing narrowly on one thing,” Benzel said. “They have the luxury and ability to look broadly.”

She also encouraged the development of more multi-organizational collaboration to accelerate advances in cybersecurity. This would help research stay one step ahead of cybersecurity threats, Benzel added.

Benzel’s background in cybersecurity is somewhat unique. She has experience both in academic research and working for a commercial cybersecurity company. Before coming to USC, Benzel was a division vice president for McAfee Inc., a computer software company formerly known as Networks Associates Inc. She also serves as the technical project lead for the Cyber Defense Technology Experimental Research (DETER), a collaboration between ISI and University of California at Berkeley dedicated to encouraging innovative cybersecurity research.

Benzel has previously testified before Congress. She also spoke after 9/11 about how to protect American computers from attack.

“Cybersecurity is now a constant challenge for every facet of civilized society,” Benzel said. “New approaches to research and development must be energized.”