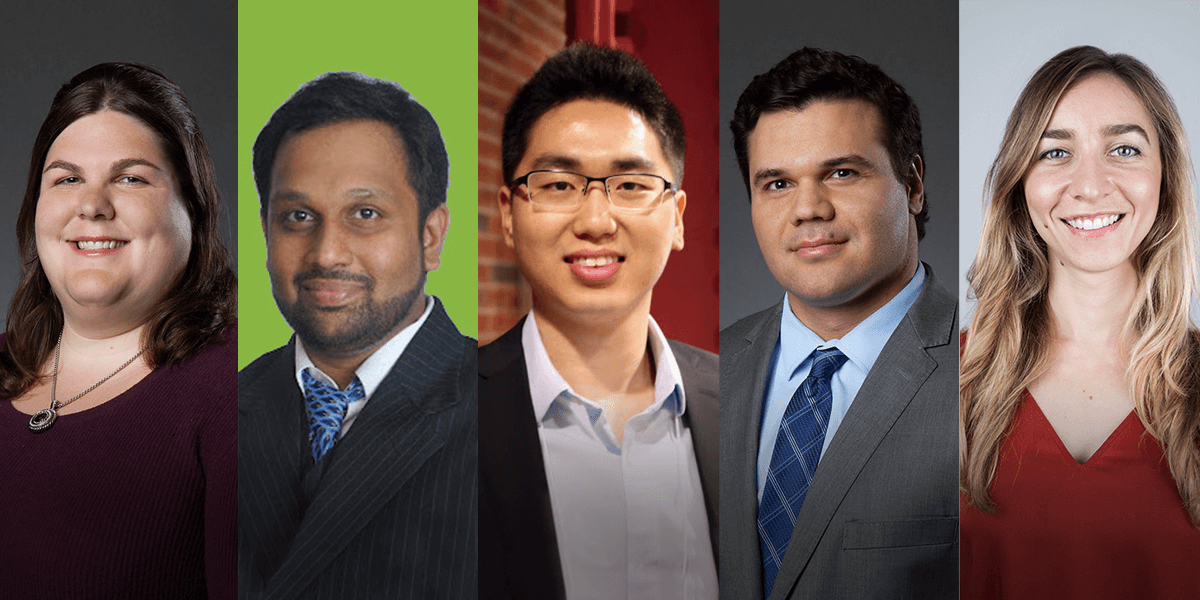 Five professors at the USC Viterbi School of Engineering received the prestigious National Science Foundation (NSF) CAREER Award in 2021. Recipients of the award are early-career faculty members whose outstanding integration of research and education poises them for ongoing leadership in their respective fields.

Culbertson’s NSF CAREER Award is an extension of her work on social touch. Specifically, it explores the concept of the “uncanny valley” in touch. The uncanny valley explains why human-like objects appear creepy or unnerving — think zombies or humanoid robots. It’s caused, said Culbertson, when a robot’s behavior does not match our expectations of human-like behavior. Now, she is exploring the concept applied to the world of touch sensations.

“We have been focusing on developing devices that can create realistic social touch, but we don’t really know what level of realism users prefer or how realism affects the perception of the virtual touch,” said Culbertson.

Culbertson and her team will study the existence and effects of a “haptic uncanny valley” as it relates to social touch. Specifically, they will compare touches from haptic devices with varying realism to determine what creates unsettling or unnerving sensations.

The team will also study other factors including the visual representation of the user in VR and the embodiment of the toucher using a haptic device or robot for touch. The research aims to generate guidelines for designers creating virtual social touch interactions.

“This research is important because it will create design guidelines for haptics, human-computer interaction and human-robot interaction designers creating physical social systems, allowing them to avoid designs that lie in the uncanny valley to create interactions that are pleasant, immersive and socially appropriate,” said Culbertson.

Deshmukh, a former principal research engineer at Toyota Motors, is interested in studying cyber-physical systems that use machine learning-based components. His work aims to improve the safety of fully autonomous systems such as self-driving cars, aerial robots and assistive robots in healthcare settings.

“I love the idea of a robot driving me to work, but at the same time, I am wary that incorrectly designed robots can be more of a nuisance or a safety hazard than a help,” said Deshmukh.

“We are always one or two accidents away from public mistrust in autonomy. Doing my small bit to make such autonomous systems safer and hopefully creating innovative design methodologies along the way is an exciting prospect.”

Currently, deep learning for controlling autonomous systems is largely being developed in laboratory settings, said Deshmukh, without the accompanying software engineering rigor and support from the design automation community.

Specifically, the proposal, titled “A Framework for Logic-based Requirements to guide Safe Deep Learning for Autonomous Mobile Systems,” aims to develop a framework for specifying mathematically precise and rigorous specifications for autonomous systems to serve as a proxy for human guidance.

“We propose a logic-driven approach, where priority is given to satisfying safety and performance specifications,” said Deshmuk. “My hope is that this project, like my work at Toyota, lends a certain formal rigor to the design process of control for safety-critical autonomous systems.”

Ren, who is also a research team leader at the USC Information Science Institute, envisions a future where people can interact naturally with machine learning systems; where annotating training data doesn’t take days and cost thousands of dollars for a single task; and where science, medicine law and even commonsense knowledge can be referenced and incorporated when developing systems.

“I want to make a machine’s learning process more of a conversation between human and machine,” said Ren. His goal is to improve systems such as voice assistants like Siri and Alexa and recommender systems like Netflix, YouTube and Amazon.

Ren’s new NSF CAREER Award project, titled “Teaching Machines through Human Explanations for Information Extraction,” seeks to “solicit natural language explanations from humans about how a machine should think about information extraction, as well as explanations correcting erroneous thinking, and an alerting system when a machine’s rationale is possibly going wrong.”

“The intention is for machines to require far fewer examples to learn from, as well as providing a process of softening the rigidity of current extraction methods,” said Ren.

For information extraction tasks, even when a sufficient number of examples exist, machines learn very rigid methods, such that even a slight misspelling can cause a methodology to fail. As a result, said Ren, researchers need to re-think of how machine-based extraction methods are developed, refined and maintained.

“The project looks to fundamentally change the way models are trained, refined and updated, and do so by exploiting the expert knowledge contained within human explanations,” said Ren.

Sideris focuses broadly on analog/RF integrated circuits, photonics, and computational electromagnetics. One of the fundamental challenges in these fields is how difficult and time-consuming electromagnetic (EM) devices are to design. With the support of the NSF CAREER Award, Sideris aims to develop algorithms that can automate much of the process for a whole host of new electromagnetic devices.

EM devices play a crucial role in many areas that society and emerging technologies depend on, including wireless communications, computing, and sensing. Along with circuits, they make up the most important parts in many of our advanced devices. But while digital circuit design has benefited from a process of automation and optimization, the same cannot be said for EM devices.

The implications of automation cannot be understated. For circuit design, automation has helped bring about new hardware that we never previously thought imaginable. Today’s microprocessors, which feature billions of transistors on a chip just a few square centimeters in size, would not be possible without our ability to automate much of the process. But no such framework currently exists for EM devices. They must be painstakingly designed manually by humans from the ground up, meaning that technologies that rely on both circuitry and EM devices can never realize their full potential.

Like previous advances in automating digital logic design, EM device automation is about much more than simply saving time and resources. Sideris believes the process will help bring about a new generation of devices that humans could never have conceived of or designed all on their own. “Our proposed automated synthesis framework can explore significantly more of the design space than would be feasible for any human designer. This enables it to often result in high-performance designs that a human would never arrive at on their own,” he said.

Vayanos aims to improve our critical systems that allocate scarce resources to satisfy basic needs — such as hospitals that provide treatments, social services that offer preventive care, or homeless services that provide shelter and housing. The central application that will guide her research is the problem of allocating scarce housing resources to those experiencing homelessness and will be facilitated by a collaboration with the Los Angeles Homeless Services Authority and with homelessness experts.

“Our goal in this project is to devise a framework for allocating scarce resources that is more efficient and equitable and that correctly balances conflicting stakeholder objectives, while accounting for underlying biases, incentives, and disparities,” Vayanos said.

Vayanos’ research is focused on optimization, artificial intelligence (AI) and machine learning; and in particular, on algorithmic fairness, interpretability and robustness. Her work investigates how tools in these areas can be harnessed to solve society’s most pressing problems and inform public policy. Her goal is to design systems that drive efficient decision-making while addressing bias and inequality to tackle challenges such as homelessness, substance use, suicide prevention, and organ allocation. Vayanos aims to assist underserved and marginalized communities in these areas by giving them an active role in the design of the systems that affect them.

Vayanos is associate director of the CAIS Center for Artificial Intelligence in Society. Prior to joining USC, she was a lecturer in the Operations Research and Statistics Group at the MIT Sloan School of Management and a postdoctoral researcher at the MIT Operations Research Center. In 2020, Vayanos was awarded an INFORMS Diversity, Equity, and Inclusion Ambassador Program Award for her project to bring STEM education to high school students in underserved communities.

Vayanos holds a Ph.D. in operations research and a Master of Engineering in electrical and electronic engineering, both from Imperial College London.