Founded in 1972, ISI has played a pivotal role in numerous technological advances – including major contributions to conceiving, designing and implementing the Internet and its predecessor, the Department of Advanced Research Projects Agency (DARPA) communication system known as ARPANET. The research center, part of the USC Viterbi School of Engineering, currently has 350 researchers and support staff working at its headquarter facilities in Marina del Rey, as well as in Arlington, Va.

“ISI has been an outstanding creative force in all aspects of digital science throughout the four decades since its founding, starting with its role in the invention of the Internet and continuing through its current pioneering work in quantum computing,” said USC Viterbi dean Yannis C. Yortsos. “We at the USC Viterbi School of Engineering are proud to be the home of such an extraordinary institution.” 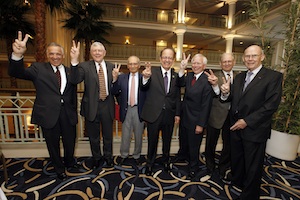 USC Viterbi professor emeritus George Bekey, a past chairman of the university’s electrical engineering and computer science departments, led off recounting the single week of ISI’s birth. On April 17, 1972, Bekey was approached by ISI founder Keith Uncapher and two fellow RAND Corp. employees in search of a research university home for a novel, as-yet-unformed computing institute.

Uncapher and his colleagues had been told by UCLA that the creation of such a research facility would take 15 months. In a matter of days, Uncapher met with then-Dean Zohrab Kaprielian, who jumped at the chance. He informed USC’s then-trustees about their new institute rather than ask permission to create it. Office space was promptly leased in the Marina del Rey building that still houses ISI.

Rod Beckstrom, president and CEO of the Internet Corporation for Assigned Names and Numbers, spoke about ISI’s intimate role in numerous aspects of the Internet’s evolution. Among those contributions: ISI’s work in developing the now universal Domain Name System and its vital role in administering the Request for Comments series, the catalyst and written record of the emerging Internet’s technical structure and operation. (The first Net address created was isi.edu.)

Other speakers were president and CEO of the Corporation for National Research Initiatives Robert Kahn, originator of the ARPANET program at DARPA and co-author of the TCP/IP Internet communication protocols, who discussed ISI’s role in the development of computing technology; William Sutherland, a pivotal leader in PC development and former head of three of the nation’s major research labs, who described the creation of ISI’s unique MOSIS experimental microchip production system, a key tool for worldwide chip designers; and William Swartout, director of technology at the USC Institute for Creative Technologies, who recounted ISI’s contributions to artificial intelligence, a field that has expanded into key areas of fundamental and revolutionary research.

Nikias noted that an off-site research facility that began as a single grant now attracts nearly $60 million each year for basic and applied research. Above all else, the president emphasized the contributions of one person: ISI executive director Schorr, who will step down from his post when his replacement is found.

Nikias also focused on the close connection between ISI and USC, exemplified by the shuttle that carries students and faculty between the two campuses five times a day. Addressing the nearly 200 ISI staffers who filled the ballroom: “You bring great honor to the university, and we are so proud to be your home.”

Peter Diamandis, chairman and CEO of the X PRIZE Foundation, served as the evening’s keynote speaker, sharing his own bold experiences in innovation as creator of the $10 million X PRIZE for commercial space flight. Attendees then enjoyed classical music by the Hidden Talent Trio, led by ISI’s Carl Kesselman, professor and director of the USC Center for Grid Technologies.

“We are now beginning to witness that ISI and USC are becoming an attractive force to the U.S. computer science community,” ISI founder Uncapher wrote in 1973. “I believe that we will be very successful in attracting very, very good computer people.”

Those who attended ISI’s celebrations witnessed for themselves how Uncapher’s dreams have been fulfilled.

The 2022 awards luncheon, hosted in-person for the first time since 2019, honored the outstanding dedication and excellence of USC Viterbi faculty and staff.

Over 2,000 engineering students expected to graduate